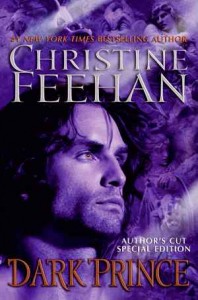 It’s not often that I get to indulge in pure fantasy junk food. Paranormal romance is not my usual choice, but a friend was interested in Dark Prince

, so I decided to give it a try before I passed it along. I had a stressful business trip on the schedule and I thought that some chiseled, supernaturally handsome vampires would be great company in my lonely hotel room – and I was right. Dark Prince is literary junk food – no nutritional value but oh, so tasty.

Of course, it’s vampires. This is the first book in Feehan’s Dark series, originally published in 1999, reissued with additional material — 100 pages worth — and a purple cover, certainly earned by the purple prose within.  Curling up with the Carpathians in my hotel room took me right back to my mother’s Harlequin romance novels: the men are chiseled, strong, exotic and extraordinarily handsome, while the women are tiny, hauntingly beautiful beings who will stand up for themselves, but always seem to bow to their menfolk in the end. But Feehan must be doing something that resonates with readers — there are more than 20 books in the Dark series. I can see how easily readers can be drawn into the story of Mikhail and Raven.

Mikhail is the prince of the Carpathians, an ancient race of beings that are almost-but-not-completely vampires. They stay out of the sun, they drink blood, the shape-shift, turn into mist, control the minds of humans…but they aren’t vampires. Carpathian males are perpetually searching for their lifemate; if they don’t find her, they will eventually fall into darkness and either commit suicide or become a true vampire. Mikhail has nearly given up on the search when he “meets” Raven. He knows almost immediately that she is his true lifemate, but no human woman has ever survived the conversion without losing her mind. Will Raven be the one?

Of course she will — we all know that.  It’s all in how she gets there. In addition, there are vampire hunters who are determined to wipe out Mikhail’s clan, there are nosy tourists at the inn where Raven is staying, and there is a tremendous clash of wills between a [fairly] modern woman and an old-world prince, accustomed to being obeyed.  Oh, and did I mention the hot sex?

This was a quick, fun read. I zipped through it in a couple of nights and it was perfect hotel room fodder on a tough trip.  It didn’t require a lot of focus, it had just enough plot to keep the story moving along, and the sex was pretty hot. Of course, I ran into the problems I always have with romance novels.  The main characters are supernaturally beautiful (Raven is described as “tiny” 13 different times and I lost track of how many times we’re told she’s small and delicate). The language is flowery and over-the-top. the sex is hot, but the descriptions! There must be a list of romance novel sex phrases online somewhere and there is little that will dampen my interest in a love scene faster than reading about his pulsing manhood and her quivering sheath. The text could really use Coco Chanel’s advice: look at each sentence and remove one adjective before you hit save.

Does that sound harsh? It shouldn’t. I enjoyed this book! I won’t be picking up the rest of the series but if I was stuck in the airport, like I am this morning, I wouldn’t feel bad about picking up one of Feehan’s novels at the concourse bookstore. It will certainly be a fun read and I can rein in my eye-rolling for a few hundred pages. I never trust people who never read trashy novels; everyone needs a guilty pleasure. Paging through the reviews here you’ll find serious literary fiction, sci-fi, non-fiction, dashing detectives and scary serial killers. Balance is important and I like my books as varied as I like my dinner menu. I’m grateful to the friend whose interest prompted my own. I hope she enjoys this book as well.

My copy of Dark Prince

was provided free of charge by the publisher, Harper Collins.