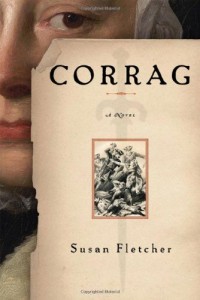 , is historical fiction that does something I love: it takes an historical event and looks at it from a new angle, through the eyes of a new character. The story is based on the 1692 Massacre of Glencoe, where supporters of King William were responsible for the deaths of 78 members of the MacDonald clan, killed because of their delay in pledging allegiance to the new king. Corrag is an English witch who had lived among them, imprisoned in the aftermath of the massacre, and sentenced to be burned alive at the stake.

There are a number of things I loved about this book. Corrag herself is a fascinating character. She has lived in a way that modern people cannot even imagine. As a girl, she is forced to flee her home and she lives, quite literally, off the land. She eats roots and berries, she sleeps under trees, her only companion a stolen horse. She eventually takes up residence in a remote valley in a lean-to she built herself from branches and cow dung. She drinks warm milk right from the cow’s teat. Corrag accepts her lot and never acts as though she expected anything more. It was a constant surprise to me that someone could live so simply, in a way that most of us would find horribly deprived, and yet be so content.

The other main character is Charles Leslie, a Jacobite minister, traveling incognito and looking for dirt on King William. He learns of Corrag’s imprisonment and hopes she will be able to provide him with the evidence he needs. He visits her in the tollbooth where she is being held, ostensibly to bring her comfort, but mostly to pump her for information.

I love the way the story is told. Corrag’s tale makes up the main narrative (and she warns you up front that she tends to talk a lot). At the end of each chapter, Charles writes a letter to his wife back in Ireland. The contrast between Corrag’s stories and the way Charles views her in the beginning is so dramatic! He goes in expecting a wild, godless, savage and to some extent, that’s what he gets. She is completely outside his experience. He takes her dirty appearance as an indication of the condition of her soul. Did he not notice that she is being held in a dungeon, with little food and no access to soap and a bathtub?

Corrag’s stories about her life, the wilderness she lives in, her connection to the world around her — they are almost poetic. I loved reading them and found myself completely caught up. I was angry — really angry — with Charles Leslie for seeing her through his narrow, pious eyes. But as the stories continue, and he gets a little scolding from his wife, he, too, begins to fall under her spell.

The MacDonalds were good people and they did not deserve the fate that befell them. They took in their murderers, offered them their hospitality, and in return they were slaughtered, their wives and children left to die of exposure in the February frost, watching as their homes burned. But Highlanders are hearty people and enough of them survived to tell the tale, not that it made any difference to King William. There is an interesting history that surrounds their story and I thoroughly enjoyed this fresh look at it.

My copy of Corrag

was provided free of charge by LibraryThing’s Early Review Program.