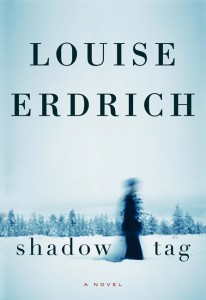 What would you do if you caught someone reading your diary? If you caught your spouse snooping in your inner-most thoughts, how angry would you be? In Louise Erdrich’s Shadow Tag

, Irene America is a woman in an abusive marriage, who discovers that her husband has been reading her diary. Instead of lashing out, she takes advantage — she starts a secret journal and uses her diary to manipulate her violent husband, Gil.

Gil is an artist and Irene is his muse. His iconic paintings of his wife have brought him tremendous success, but they have also pigeonholed him as a Native American artist:

“Don’t paint Indians. The subject wins. You’ll never be an artist. You’ll be an American Indian artist…Still, Gil had no choice. He painted Indians when he painted his wife because he couldn’t help it — the ferocity between them, the need. Her blood ancestors came out in Gil’s paint as he worked.”

There is certainly ferocity between them. There is evidence of great passion, but it is passion that has turned sour and gone wrong. Irene has fallen out of love with Gil and I am never really certain whether Gil adores Irene or despises her. He goes out of his way to antagonize her, buying her expensive gifts she doesn’t want and throwing parties that she will hate. He ridicules her in person and on canvas — he paints her nude, in demeaning positions — but she continues to model for him. They are locked in a sort of mortal combat; they hurt each other terribly but they just can’t break away.

“Here is the most telling fact: you wish to possess me. Here is another fact: I loved you and let you think you could.”

I love the way that story is both subtle and jarring. There are hints of violence and unhappiness, then there is a sudden slap. Gil dotes on his children, praising their unique qualities, then he slams his son’s forehead into the table. The family orbits around Gil, pandering to his mercurial moods — especially the children — knowing when to pull away, when to hide. Even the dogs are sensitive to it, milling around and putting themselves physically between Gil and the children.  The children seem too wise, too knowing, and then Erdrich sneaks up on you with something shocking.

The story shifts around – the red diary that Gil sneaks downstairs to read. The blue notebook, safely under lock and key. Gil’s fevered attempts to win back Irene’s love. The children, hiding in their rooms. Irene’s dreams of escape. She uses the diary she knows he reads to test and manipulate her husband, with occasionally startling results.

There are several interesting themes in the book – I kept thinking that this is one I would love to introduce to a reading group. There is the way that Gil and Irene’s Native American heritage influences their thinking and their relationship. The complex relationship between artist and model, the way that Gil has painted Irene in both beautiful and terrible ways, and the way Irene holds his career and his inspiration in the palm of her hand. There is the question of a mother’s duty to protect her children:

“Florian gave Irene a false smile. Don’t cry. He changed his voice to an insinuating whine. You’ll be okay. We’ll just put a little ice on that bruise.”

Irene is not painted as a saint here. She takes her share of swings, even if they aren’t physical. She lies to her husband in that little red book, hoping to get a reaction, hoping to make him leave. Her flaws make her an interesting character.

The ending was a shock. Occasionally, you think you see where a book is going. You’ve got an idea how the story will end and then…it doesn’t. It takes a path you never expected. In hindsight, it made perfect sense, but I was still jolted in my chair as we hurtled toward the end.

is a compelling read with flawed but sympathetic characters, an interesting premise and an excellent, gradual reveal. My copy of Shadow Tag was the unabridged audio version, read by Coleen Marlo, checked out from the Kent Free Library. Louise Erdrich is the author of 13 novels; she has also published volumes of poetry, children’s books, short stories and a memoir. She lives in Minnesota and is the owner of Birchbark Books in Minneapolis.

Regular readers know that I spend a lot of time in St. Paul — I’m going to have to go by the store and check it out!