Review: Dominance by Will Lavender 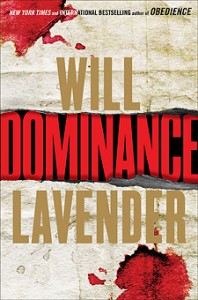 Dominance got my attention in the very first pages and hung on to it right to the end. It’s a book about a book with an author who may not even exist. It’s about the night class, taken a decade ago, and how it changed the lives of the students who took it. It’s about The Procedure, and the danger it represents. And it’s about a present-day murder and how it may change everything they thought they learned in the night class.

Back in 1994, tiny Jasper College offered a very special night class. It was taught by Richard Aldiss, a literary genius, and he would be teaching from his prison cell: Aldiss had been convicted of the brutal murders of two female graduate students at his former university. He is also an expert on author Paul Fallows, a recluse whose identity has never really been established. Aldiss challenges his students to discover Fallows’ identity and hints that in the process, they will uncover the real murderer.

In the present day, they have a new murder to solve: the death of a night classmate brings the students back to Jasper College. Alex Shipley, the star of the night class, has been asked to work with the local police — she solved the previous mystery and has at least some relationship with the genius professor. The former students congregate at the home of aged Dean Fisk for the funeral, while Alex and the police hunt for a murderer — and wonder if the night class turned one loose.

The pacing is what really draws you into the story. Writer Will Lavender doles out little nuggets of information, hints and tidbits that aren’t quite enough to really tell you what’s going on, but certainly make you keep reading. What is the Procedure, exactly? What happened in Iowa? What is the name of the man in the dark coat? What did Alex uncover in the night class?

The story has a bit of a locked-room feel to it, with all the students/suspects staying in the Dean’s home. That’s a bit of a stretch, but not completely improbable. Alex has to worry about whether there’s a murderer in the next room, plus she gets to wonder what’s going on amongst her old classmates while she is off working with the police or talking to her former professor. The story brings out Alex’s insecurities about what she discovered in the night class, about her position at Harvard, and the way she relates to her former professor and fellow students.

Dominance is a story full of juicy twists and turns. There are secrets, lies and unexpected revelations. You get enough information to keep you involved in the story, but not enough to know what it all means. I was curious at the start and every bit of revealed information fed the fires a little further. Definitely an intriguing read!

My copy of Dominance by Will Lavender was an Advanced Reader Copy, provided free of charge.