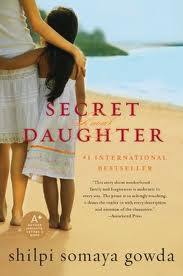 should really get 2 reviews.

There is a part of me that really enjoyed this book. It’s well-written, it paints very vivid pictures of India, and you are definitely drawn into the story and the characters. You are honestly worried for Kavita’s future. It’s easy to get caught up in Somer and Krishnan’s romance. You want Somer and her daughter to really form a bond. You can sense the clear and immediate dangers in the slums of Mumbai, and picture the lovely, well-decorated apartment, staffed with servants and scented with wonderful, spicy food. Gowda is wonderfully descriptive. That’s one face of the book.

The second face of the book nagged at me, irritated me to no end. It starts with the diagnosis from Somer’s doctor:

“By the time she reaches the age of thirty-two, she will no longer have the ability to bear children, the one thing that defines her as a woman. What will I be then?“

What?!? The only thing that makes her a woman is her ability to have babies?

For the record, I am, well, older than 32 and I am child-free by choice. I take offense when people talk about child-bearing as though it is the only important thing about being female. And no one in Secret Daughter questions this thinking. The childless friends Somer makes later on come off as shallow and trite with their yoga classes and their little dogs, caricatures of real people. Somer is the worst sort of stereotype: an ambitious, vibrant woman when she adopts her daughter, Asha, but in just a few years she has succumbed to what my friends with kids call “mommy brain.”

“Perhaps this all wouldn’t bother him so much if he felt he still had the woman he fell in love with — the intellectual partner, the equal companion. He misses talking to Somer about medicine. She used to be interested in his cases, but these days, she’d rather discuss the mundane details of Asha’s schoolwork…At times it seems the things that occupy and define his marriage today bear little resemblance to what once brought them together.”

It’s depressing. Somer becomes a boring soccer mom who stifles her daughter because of her fear that someday Asha will want to find her birth parents. I suppose that is a difficult thing for any adoptive parent to accept, but it becomes a wedge between Somer and Krishnan — who would like to make the occasional visit to India with his wife, to visit his family — and between Somer and Asha.

I found it interesting that for Jasu and Kavita, when Kavita takes their daughter to the orphanage, it is a real turning point in their relationship: even though it is the beginning of a very bleak period, and though they never speak of their daughter, their relationship slowly begins to improve. They both feel the loss in different ways, and they are able to grow together — Jasu becomes a better husband and Kavita becomes a stronger person. By contrast, when Somer and Krishnan adopt their little girl, their relationship begins to deteriorate. We read about their struggles, the ways each of them change when they become parents, and there are more dire difficulties the author hints about. It is not the way that I expected the author to deal with these relationships.

America does not fare well in this. India is vibrant and colorful, even when Gowda paints an ugly picture. Their home in America seems plastic and bland by comparison — even the food is boring. She does a better job, in my opinion, with Jasu and Kavita, showing a lot more change and growth in their relationship, but I was still unable to really lose myself in the story.

My copy of Secret Daughter

was provided free of charge for review.

And in Envelope #1…
Guest Post: Emily Sue Harvey on her new book, Homefires