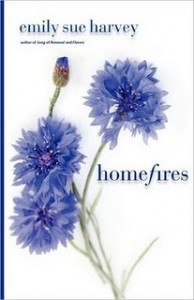 Today, we’ve got something a little different for you. I’ve got a guest post from author Emily Sue Harvey, author of Homefires

, a novel about a struggling Southern family. Here we get a taste for her new novel, as well as a bit of insight into “writing Southern.” Enjoy:

Writing is my life. After my eleven-year-old daughter died, I began keeping a daily journal. It was therapy. It gave me a reason to get up each day. It kept me putting one foot in front of the other. It helped me focus beyond the moment. It began to heal me.

It became a passion.

The inspiration to write gave me impetus to move beyond journal entries and on to nonfiction stories published in Chicken Soup, Chocolate for Women and dozens of other venues. The driving force was my decision to turn tragedy into triumph and to make a difference in others’ lives along this path called life. I wanted to show others that they, too, could triumph over adversity.

Fiction beckoned. And I began to delve into “what ifs?”

In HOMEFIRES, I asked myself, what if teenage Janeece Whitman meets brash “quiet one” Kirk Crenshaw one night on the curb outside her mill village house and he rudely ignores her while his buddies flirt with her? And what if after the first initial awkward meeting, she begins to see him in a different light when, in school homeroom, she catches him staring at her and then, when she smiles at him, he smiles back and blushes? And years later, after they marry, what if he receives the high calling? Wow. What a turnaround this will make in Janeece’s well ordered, southern life. What if she doesn’t want to be a preacher’s wife? What then? Does she dare hinder God’s called? The what ifs are infinite and intriguing. It’s from this that novels evolve.

Later on, Janeece’s world comes crashing down around her when tragedy strikes the Crenshaw family. Their life is marked by challenges to their church, to their community, and most decidedly to their marriage. Have they gone as far as they can together?

The setting for HOMEFIRES is pure southern, from the smell of fried chicken and gravy, creamy buttery grits, to the folksy dialect. “Ya’ll come back now, y’hear?” I am southern through and through and I learned something about the author-me while writing my full length novels: southern writers spare no details! Honey, we write it all. No doodle-bug hole is left unexplored.

But that’s where my whimsical side ends in this particular story.

HOMEFIRES is a preacher’s wife’s story set in seasons of change. Janeece is defined by the way she keeps the homefires burning while Pastor Kirk goes about the Father’s business. It reveals the glass-house existence of the parsonage family, the good, the bad, the ugly, the betrayals, the forgiveness, the redemption.

It reveals, ultimately, the translucent beauty of unconditional love.

Southern settings are my favorite because life there is unhurried and we usually learn, at least by middle age, to stop and smell the azalea and magnolias. Not only that but we enjoy simple things, like sitting on the shaded front porch drinking sweet iced tea, rocking and watching Disney-like scenarios featuring breathtaking butterflies, flying squirrels, warbling birds of all colors and neighbors waving at us from their own verandas. Folks sharing fresh veggies from their summer gardens. Pots of homemade soup magically appear at your front door when you get sick. Those sorts of things.

The thing I love most about writing southern is that I feel at home with every character and setting. Southerners are just plain friendly. With the Crenshaws, we will each recognize snippets of parsonage families we’ve known in our lifetime. The ones who welcomed you to drop by anytime. Ones who felt like family We will also come to realize that they, too, have feet of clay. They, too, can fail. But there is redemption for them, too.

My focus is to inspire readers to never give up. Dark times come and go. If we live long enough, they do come. You can count on it. I never sugar coat my stories. Reality isn’t gilded. Calamity strikes when we least expect it. But within each of us lurks that conquering spirit.

Reading about the Crenshaws will give each of you a hankering to sit a spell, prop up your feet, and warm yourselves by HOMEFIRES.

It will inspire you to fly with the eagles.

ABOUT THE AUTHOR…Emily Sue Harvey’s writing to make a difference. Her upbeat stories have appeared in dozens of anthologies including “Chicken Soup for the Soul,” “Chocolate for Women,” “From Eulogy to Joy,” “A Father’s Embrace,” “True Story,” “Compassionate Friends Magazine,” and “Woman’s World.” Emily Sue served as president of Southeastern Writers Association in 2008-2009. Her first novel, Song of Renewal, published by Story Plant, was released in the spring of 2009. For more information visit www.renewalstories.com.