Review: The Kingdom of Childhood by Rebecca Coleman 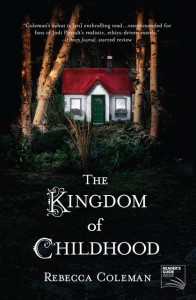 Judy McFarland’s life is a mess. Her marriage is crumbling, her school is going bankrupt, her best friend just died. She’s started to think about escape — her youngest son will be graduating soon and then she could leave, get a divorce, do whatever she wanted. Unfortunately, she doesn’t wait until after graduation. In Rebecca Coleman’s The Kingdom of Childhood

, she makes some terrible choices that devastate the people around her.

You really want to feel sorry for Judy. The school she has loved and supported for more than 20 years is financially unstable. Her husband, Russ, is withdrawn, caught up in his own career struggles and out of touch with the family. Her daughter, Maggie, away at college, is rebelling against the very principles her parents found so important. Her son, Scott, is silent and sullen (a typical teenager).  Her best friend, Bobbie, died of cancer and every day, Judy has to walk by the classroom where she used to teach. It’s a miserable situation for anyone.

The problem is, Judy makes one horrible decision after another. She is drawn to a friend of her son’s , Zach, a good kid with a dirty mind and a quick wit. She’s assigned to work with him on a school bazaar and one day, he kisses her.

If she had any sense she would have walked away right then. She would have made sure she didn’t spend time alone with him, she would have gotten some counseling, anything. Instead, she decides she can handle it. She can work with him. But she can’t. And the inevitable happens.

We don’t always think of teenage boys as being the “victim” when they are having an affair with a teacher. Sure, we know — technically — that it’s rape, that it’s a crime, but there’s still a little part of the brain that thinks the kid really got lucky. Coleman does a very good job of showing Zach’s differing reactions. Part of his mind thinks he’s gotten lucky – very lucky indeed. But he also feels pressured — Judy can be downright demanding — and although he’s pretty sure she’s joking when she says “Better watch out. You’re going to need a college recommendation one of these days,” he really can’t be sure. He’s under tremendous pressure — what if someone finds out? What will his friends say — he’s sleeping with his best friend’s mother! Will he get expelled? Will Judy get fired? It’s more than a teenager should have to deal with.

The story also wraps us up in Judy’s childhood, a strange series of flashbacks to the time her family spent in Germany. Her father worked at a military base while her mother went slowly insane. In some ways, her childhood mirrors Zach’s, in that they both learned things about their parents that they were far too young to deal with.

The book is set in a Waldorf School. This was a new concept for me and I could see why people would be drawn to it, especially for young children. Certainly an affair like Zach and Judy’s could have taken place in any suburban high school, but there is something about the freedom and wholesomeness of the Waldorf environment that makes it seem by turns more inevitable and more perverse.

This isn’t a book with a lot of plot twists — you know what’s coming. You can feel the rumble, see the headlights of the oncoming truck, but you can’t get out of the way. Still, the book kept me intrigued through the ending, which was what I expected, even as I hoped they would be able to change it.

For more information on Rebecca Coleman, check out her website. My copy of The Kingdom of Childhood

3 comments for “Review: The Kingdom of Childhood by Rebecca Coleman”