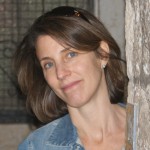 It’s Friday and that (usually) means there will be a Guest Post or an Author Interview. I recently had the pleasure of interviewing Sharon Bially, author of Veronica’s Nap

, a book about a woman on the verge of success who is tripped up by her own procrastination. Sharon was a very good sport about answering my sometimes irreverent questions, and I hope you enjoy her answers (the really fun stuff is at the end!).

For more on Veronica’s Nap, check out www.veronicas-nap.com.

ALIVE ON THE SHELVES Interview with Sharon Bially, author of Veronica’s Nap

Q: According to your bio, you’ve lived in several different countries, your family lives all over the world and your husband is European. How has that influenced your writing?

It’s influenced it in every imaginable way.  Having double-majored in French in college, my first literary loves were books by Jean-Paul Sartre and Simone de Beauvoir.  I’ve now also been speaking French at home for well over twenty years, and French and English are one in the same for me.  This can can do strange things to the way I think and write in English — even to my English vocabulary.  It often takes multiple rounds of revisions for me to spot and get rid of words like “complicitous” and replace them with simpler equivalents like “friendly.”

Marriage to a French man and over a decade of life in Paris and the south of France are the main sources of my story inspiration, too.  As a foreigner extremely well-integrated into French society, I’ve been able to observe it from the inside yet maintain an outsider’s objectivity.  Talk about fodder for story ideas!  And my husband’s family alone is a gold-mine for ideas, with its tumultuous history of deportation and hiding during the Nazi occupation of France and the mind-boggling impact this continues to have on them today.  Not to mention that they’re spread out all over France, Italy and Israel now, so each of them brings a unique cultural background and worldview to the mix — great food for thought and the imagination.

Q: I love Paris! It’s one of my favorite cities to visit. I love the view from Sacre Coeur on a sunny day – what’s your favorite view in the city?

When I was a student living in Paris in the ‘80s, my French boyfriend lived in a 7th-floor chambre de bonne just over the bridge from the Ile St. Louis on the right-bank side.  From it’s single tiny window there was a  breathtaking, panoramic view of the Latin Quarter, the Pantheon, the Ile St. Louis, the Seine and everything along it, but from so close down that it felt like you could touch it all.  Everything was so new and romantic back then, too, that the memories that view brings back make it extra-special.

But I have other favorites, too, each for its own reason.  Looking down the Rue des Rosiers in the Marais brings me back in time in a mysterious way, making me feel like I must have lived in Paris in another lifetime, centuries ago.  There’s also the peaceful, village-like Rue d’Auteuil in the 16th arrondissement, where I lived and worked throughout all my 8 years in Paris.  It kind of merges at the end with the Bois de Boulogne, disappearing into the woods as if it were out in the countryside or at the edge of an enchanted forest.  I love that mixture of city and nature — and can almost smell the delicious autumn humidity there as I write this!  (*Sighs.*)

Q: In the novel, Veronica is a procrastinator (so am I). Is that something you struggle with?

Ha!  I WISH I were a procrastinator!  I think that’s why I was intrigued enough by Veronica as a character to want to write a book about her.  Unlike her, I’m the hyper-busy, driven type and am always too worried about providing for myself and my family while trying to make some of my own dreams come true to procrastinate anything major.  Sure, there’s the occasional bill that gets put off till the last minute (or later), RSVPs to kids’ birthday parties I completely forget about till the eleventh hour and laundry that tends to pile up for several weeks, but I think that’s more about being too swamped than about procrastinating.  The bigger-picture things — writing, my job, my kids’ academic and extra-curricular lives — always get taken care of pretty much on time.  But truthfully, I sometimes long for the kind of life where I can say, “I’ll do that tomorrow” about the bigger-picture things, too.  I imagine it would be a lot more peaceful overall.

Q: What’s the hardest thing about juggling your writing and your family?

The frustration of never having enough time.  On top of writing and family, I have a busy job as a publicist and work always comes first.  Since I work from home, I also need to get up and drive my kids to their activities in the afternoons, which lops a few hours off my schedule.  (I do keep right on working when they’re in the house, though — at 8 and 12 they’re pretty independent in that way and know the drill!)

Since I also blog, take dance classes, lead seminars for Grub Street Writers and try to do some book promo when I can, it seems like I just never stop working, which can be a grind.  And so far, I haven’t made much progress on my new book, Henna.  Sooner or later, something’s going to have to give.

It seems that e-reader users are often quick to buy a title — especially a cheap one — but don’t necessarily read every one they buy.  They also seem to not to read paper books anymore.  Ever.  If a title’s not out in an e-book version, you can rest assured the majority of the e-book reading population won’t buy it!  But of course, I don’t know for sure.  And for the record, I don’t have an e-reader.  Yet.

Okay, those are the serious questions. Now for the fun stuff!

I just found out this week that a bialy is a flatbread topped with chopped onions. Does that remind you of anyone in your family?

Of course!  My entire family!  Both my parents are originally from Brooklyn, where the bialy rules.  (The words bialy and Bially are related to the Russian word biel, meaning white. My family’s originally from the former Russian / now Polish city of Bialystok, or so the story goes….)

And by the way — it’s rare to meet somebody who knows what a bialy is.  Kudos!

Both!  But white more often.

The beach or the mountains?

The beach.  Hands down.  Except during green fly season.  Ick!

Cake, cake and more cake please. Especially anything creamy and chocolaty that I can hog when nobody else is around.

Hmmm.  A little of both. I get up on the late side — usually 7:30 — but the minute I’m up I’m off and running, literally, since I start each day with a jog.  Then I go right to multi-tasking some quick housework with getting my kids out to school before sitting down to work.  But I tend to work late at night, too, often banging away on my keyboard till about 11:30, then reading for a half an hour before going to sleep.

Can’t have one without the other. 🙂

Sharon Bially lived for twelve years in Paris and Aix-en-Provence before settling with her family in Massachusetts.  A graduate of Columbia University’s School of International and Public Affairs, she’s a public relations professional and leads seminars for the Boston-based, nonprofit literary arts center, Grub Street Writers.  She’s also an adult student of ballet and modern dance.

You can visit Sharon’s website and blog at www.veronicas-nap.com.