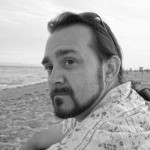 We’ve got a special guest today – author M.E. Patterson is here to talk about his new book, Devil’s Hand. The story takes place in Las Vegas and I was curious about why he picked Sin City.  Here’s his answer — and make sure to check out the end of the post for information on where you can buy Devil’s Hand.

We all know to look for horror in the dark places, in the damp alleys of New York City, in sleepy New England towns, or lonely snow-filled nowheres. These are the places to set a story that keeps readers up all night with the lights on. But where do you find darkness in an oasis in the desert, where the unrelenting sun beats down all day, and neon illuminates temples of power and money all night?

Las Vegas, the City of Sin, the place where anything goes, where mistakes stay buried, makes a great place for dark stories. What secrets is the shady casino boss hiding? The dealer? The call girl? Who left that hooker dead and strangled in the bathroom of the penthouse suite? How many, with fortunes evaporated, have turned to desperate measures in the city where nothing seems real? Sure, makes sense. But asupernatural story? Ghosts? Demons? Monsters?

Why? Because Las Vegas is the Garden of Eden, dried up, dusted over, dead and buried. And a wound like that spawns a lot of nasty.

In the 1920s, an archaeologist named Alan LeBaron cooked up a series of explorations in the Nevada desert around Las Vegas and beyond. In March of 1927, he declared to the Los Angeles Times that “the human race originated here…this was the Garden of Eden.”

It’s a fantastic claim, but LeBaron was dead serious. He believed that the human race had its origins in Nevada and he spent the remainder of his life digging up evidence to support his claim: incongruous Chinese heiroglyphs painted on cave walls near Baker Creek, long before the Chinese had ever set foot there; ancient Egyptian writing on tombs near Yerington; human remains with Asian features buried in fissures beneath the desert; caves filled with the skeletons of men easily seven feet tall, with a few remaining strands of bright red hair. LeBaron believed in an ancient paradise that began to dry up over geologic time after the Sierra Nevadas shut off the Pacific winds. The Garden dried, then burned, and the humans were driven out.

Fast-forward to today and Las Vegas is much like any other city in America: unemployment, traffic, taxes, politics. What makes Vegas different is the role that ungodly amounts of money—and with it, power—plays there. For a landlocked city in the middle of a desert, Vegas sports an impressive number of water features and swimming pools. Residents work to keep their lawns green through 115-degree summers. Casinos blast air conditioning with the entrances open to the sun-scorched sidewalks, a siren’s call beckoning, “come in, weary traveler, enjoy the cool air, play some slots…” Stories abound of how the law gives deference to the powerful casino corporations when it comes to, shall we say, transgressions, on their properties.

It’s an environment ready-made for manipulative demons and angels with ancient grudges. It’s a city where the destitute and cash-strapped take refuge in miles of drainage tunnels beneath the city, rather than hitchhike to Reno or head west to California, where living might be easier. It’s a place settled by a dozen different groups over the centuries, each of whom failed and moved on, only to be followed by the next group that couldn’t resist the call: American Indians, mountain men, explorers, the Army, Mormons and Mafias, to name a few. People feel a need to be there, to settle there, to taste the dust-dry winds of luck and chance, and neither Hell nor dehydration will stop them from coming.

LeBaron only cracked the surface of the desert’s secrets. Beneath the concrete and neon is something stranger, something far older than any of our sad attempts to take residence in what the Spanish once called The Meadows. Las Vegas sits atop something mystical that keeps drawing us back to our origins. It’s a playland, atop a wasteland that we wrought with our signs against God and nature. A den of iniquities where an oasis once stood.

Why make Las Vegas the stage for a story of demons and angels, monsters and men?

Because they’re already in great company.

M. E. Patterson is an author of sci-fi, fantasy, horror, and thrillers, as well as an information technologist. He received an English/Fiction Writing degree from Virginia Tech, where he studied under nationally-recognized writers and poets. He has published short stories on RevolutionSF and his first manuscript for his book, Devil’s Hand, placed in the top five in the Writers’ League of Texas Manuscript Contest.

You can visit his website at http://devils-hand.com or his blog at http://blog.digimonkey.com.