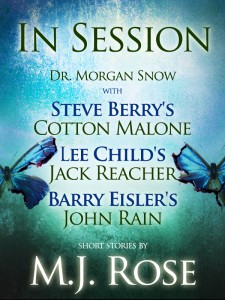 Today, another special Guest Post Treat! We’ve got a special guest post from author M.J. Rose who has a terrific new book.  In Session is essentially fan fiction (one of my guilty pleasures). Rose puts one of her characters, Dr. Morgan Snow, in therapy sessions with some of her favorite literary tough guys. It’s a fabulous premise…but I’ll let M.J. tell you more about it…

What’s the worst that can happen?

One day I started to fantasize what would happen if my character from The Butterfield Institute series (http://www.mjrose.com/content/books_butterfield.asp) , Dr. Morgan Snow got some of my favorite tough guys in suspense on her couch.   What twisted pasts, what traumas, what mysteries would she discover?

How much fun would it be to try it, was my first thought.

What a crazy creative challenge, was my second.

But could I ever get up the nerve to ask Lee Child Steve Barry or Barry Eisler to let me borrow their bestselling characters? No less put them in compromising positions.

And even if I could pull it off and write in their voices, what possible reason would any of them have for saying yes?

The most important thing my mother taught me was not to be afraid of trying something out of my comfort zone. “What’s the worst thing that can happen?” she’d ask when something made me nervous. Together we’d go through all the possible results. Talking them out one by one- they never seemed as bad as they did in my imagination.

So I took a really deep breath and asked Lee Child first. He said he couldn’t imagine Reacher ever going to see a sex therapist but if I could pull it off, it sounded like fun.  Steve Berry was next. He said pretty much the same thing.  Eisler was no different.

The stakes got higher when Phil Gigante  – who along with Natalie Ross –said they’d narrate the stories if the project came to fruition came up with a marvelous idea. What about asking Dick Hill – Reacher’s Voice, Scott Brick – Malone’s voice, and Eisler – who does Rain – to do their own dialog in the audio version?

I spent a good part of the summer writing the stories. Alternating enjoying the hell out the challenge, agonizing and cursing my hubris. Why had I thought I could do this? These are well established heroes. They have their unique ways of talking, thinking and acting. Not to mention  the possible really awful rejection.

When it was time to send them off, have the authors read my efforts, do some editing if they wanted and hopefully give their blessing, I totally froze.

I’d written 11 novels. Had my share of nice accolades and reviews. Felt fairly good about my career. But suddenly I was as nervous as a the proverbial (and virginal) bride on her wedding night.

Why was I actively courting rejection and embarrassment? Why was I putting three writers who I respect and admire in the uncomfortable position of having to tell me I’d failed?

For an entire week I thought about scrapping the whole idea and not showing any of them the stories.

Finally I got to the core question. Really, what was the worst thing that could happen?

Amazingly, I never found out. And boy, did I have fun!

In honor of these amazingly generous authors who shared their heroes with me a share of the e-book proceeds and all the audio proceeds of In Session will be donated to David Baldacci’s Wish You Well Foundation, supporting family literacy. (wishyouwellfoundation.org/)

The e-book and audio book will go on sale Oct 17 but the e-book is available to pre-order at Amazon now.http://www.amazon.com/Session-Morgan-Reacher-Eislers-ebook/dp/B005OLJ3VC