Happy Halloween!  What could be better on Halloween than a guest post from the author of a scary book? Today, I’ve got Rob Blackwell, author of A Soul To Steal

, a new twist on an old favorite. Want to know which favorite?  Here’s a couple of clues: 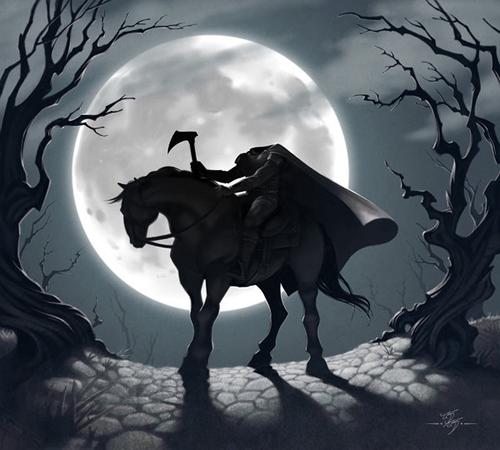 I first met the Headless Horseman when I was in the third grade. I have never fully recovered.

I think it was designed as a treat for the kids on Halloween, but the decision to show the Disney adaptation of The Legend of Sleepy Hollow in class proved fateful to me. I lasted until the specter started chasing poor Ichabod Crane before I burst into tears and had to be escorted from the room. I spent the rest of the movie hanging around the door in the hallway, fearful to look inside but desperate to know what was happening.

In a way, I’m still hanging around that doorway. Since that day, the Headless Horseman has held a strange fascination for me. Every year in October, I re-read The Legend of Sleepy Hollow, and I’ve seen most every adaptation made of the story, even the really awful one starring former Chicago Bear Dick Butkus.

So it’s no surprise that when I wrote my first novel, A Soul to Steal, the Headless Horseman played a starring role. My protagonist, Quinn, has been haunted since childhood by visions of the specter. Sound familiar?

While Quinn eventually has to deal with the very real appearance of the Headless Horseman, I’ve been left wondering why the ghost of Sleepy Hollow continues to enjoy such popularity today. It’s clearly not just me that loves The Legend of Sleepy Hollow.

The Headless Horseman has starred in a couple good movies, several bad ones, two musicals, an opera and even a ballet. That’s in addition to numerous television specials and audiobooks.

While Dracula and Frankenstein undoubtedly trump him world-wide, the Horseman is easily the most popular and recognizable gothic figure in American fiction.  It’s been 191 years since Washington Irving released his story, and yet its popularity seems unlikely to abate anytime soon. Why is that? There are a lot of ghost stories out there, but most don’t have nearly the same kind of staying power.

I have a few theories.

1) The story draws on the mythic. Irving didn’t really invent the Headless Horseman—he was based on German folklore (hence why Irving makes his version a former Hessian soldier from the Revolutionary War.) The story of a phantom roaming the land preying on the living is probably as old as civilization and speaks to something primal in all of us.

2) The story is ambiguous. Irving implies that the Headless Horseman isn’t real—Bromm Bones, Ichabod’s rival, has a “knowing look” whenever Ichabod’s story is told—but he leaves the door open to other interpretations (the Disney cartoon version, for example, strongly implies the supernatural was involved.) This is the best kind of ghost story. The reader can believe whatever he or she wants and can debate it among friends. Irving even leaves it unclear if Ichabod died or simply fled, inviting further discussion.

3) The story features classic characters and vivid descriptions. The world may have changed a lot in two centuries, but human nature hasn’t. The characters in the story still seem recognizable today. It’s easy to see people today like Ichabod, the know-it-all school teacher, Katrina, the coquettish flirt and Bromm, the town jock and bully.

But all that doesn’t get down to the most obvious reason for his enduring popularity—the Headless Horseman is scary as hell. Why? For one, he has no head, which is unnerving in and of itself. It’s the most basic attribute of a living creature and usually a prime weak spot, even for monsters. Vampires and zombies can both be killed by beheading them. But how do you kill the Headless Horseman? (Side note: I actually struggled in my novel to come up with an answer to this, but I did finally do so.)

Making things even more terrifying, the Headless Horseman runs “like a midnight blast.” This isn’t some shambling creature of the undead blindly trying to find you in the woods. This is a demon with lightning speed running you to ground. You can’t kill him and you can’t escape him. I can’t think of anything scarier.

That’s what makes the Headless Horseman so unforgettable—and irresistible.

Rob Blackwell is the author of A Soul To Steal

, now available as an e-book on Amazon, Barnes and Noble, iTunes and Smashwords. He is currently blog-less, but you can find him on Goodreads, Twitter (@hobbinb) and Facebook.

Links: A Soul To Steal

at Amazon.com
Soul to Steal at Barnes and Noble