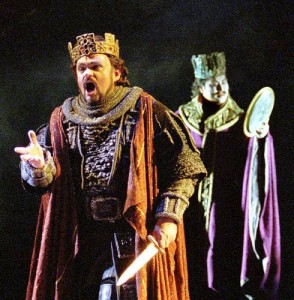 William Shakespeare’s Macbeth contains a lotof life lessons. Number one: Don’t listen to stranger bearded women when wandering through a fog. Number two: Never let anyone bully you into doing something you don’t want to, even if it’s your wife. And Number 3? If you want to become king, the kill-everything-in-your-path strategy, while seemingly effective, is bound to backfire.

Macbeth is indeed a cautionary tale of greed, power and ambition. At the play’s core, it is about humanity’s tendency for evil and ruthlessness, particularly when fueled by the desire for ascension. Macbeth, a Scottish nobleman fresh from a ruthlessly victorious battle, stumbles upon a pack of prophesizing witches who imply that kinghood is in his future, effectively messing with his head and ego. Just a few little words set Macbeth in motion to achieve his fate of being king, instead of letting things unfold naturally.

Looking at Macbeth summary, Macbeth stands somewhat as a tragic hero and a villain in the play, as he is a man whose ambitious ego and thirst for power sets him on a path of destruction that inevitably arrives at a grisly destination with his head on a spike. Violent is as violent does for Macbeth.

What we learn from Macbeth, aside from the whole downside in embarking on a murderous rampage, is that our desires and our emotions control us much more than we think. It also highlights how easily swayed humanity can be at times, when all it takes is some eerie women to plant a seed of power in our impressionable egos. At its basic level, Macbeth is about the power and drive of man, and how that power and drive can effortlessly steer us off course. Take, for example, a selection from Macbeth quotes featuring the hallucinations of Macbeth that finally convinces him to kill the king. A floating mirage of a dagger, “a dagger of the mind” he calls it, seals the deal for Macbeth, reading it as something to “marshal’st” him on his way to power. Note the level of agency he ascribes to this image, which could either be a manifestation of the witches or of his “heat-oppressed” brain. The image is both a sign and a usher of sorts for Macbeth, suggesting his own lack of agency and self-determination that allows him to be easily swayed. A helpful comparison in understanding Macbeth’s craziness can found in another famous Shakespearean play where a tragic hero is conflicted with inaction, uncertainty and of course, impressionability when it comes to the supernatural. In the Hamlet summary, Hamlet is directed on a path to avenging his late father by his father’s ghost. He wavers and flip-flops on what to do—much like Macbeth—until finally committing the first murder (Poor Polonius!) that gets the ball rolling. For him, as for Macbeth, the first murder is always the hardest, but it gets easier with next few. For Macbeth, it gets excessively easier.

The tendency to be impressionable—either by one’s own mind tricks or the biting word from Lady Macbeth or the witches—makes Macbeth vulnerable to his own impulses of greed and power and the subsequent implication for evil. It’s also what makes him appear partly as a tragic hero, someone whose flaws of initial weak sense of self allows him to be a plaything of fates and witches. Those reading Macbeth as a tale of power and greed must also take into consideration how such ambitions are essentially weaknesses for Macbeth, as he fails prey to his own flaws. A cautionary tale indeed.

Shmoop offers hundreds of free educational guides and references. We believe that any topic, like Macbeth quotes or Hamlet summary, can be broken down in a way that is relatable and fun for students. . . We keep things more interesting by using television shows, video games, music, and fashion references throughout our guides. Our goal is not only to present the fundamentals, but to bring the material to life in a way that makes students ask more questions, instead of less. Check out Shmoop’s website to see how all of our free resources can make a difference in your study time.