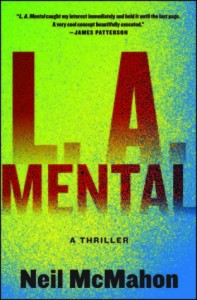 The world is going crazy around Tom Crandall in Neil McMahon’s L.A. Mental

. His brother, Nick, calls him in a paranoid frenzy, probably drug-induced. When Tom finds him, Nick literally jumps off a cliff. His sister, Erica, has been receiving threats. His brother Paul is involved in a film project with a charismatic figure that he follows with a cult-like intensity. And those are the only strange things happening — all over Los Angeles, people are going on destructive rampages for no discernible reason. Is there a connection?

The story gets better — and stranger. The film project looks very much like a cult. The project’s leader, Gunnar Kelso, is a former physicist, a brilliant scientist whose ideas may have gone off the deep end. Now he has a posse of Beautiful People — actors, writers, producers and the wealthy elite — huddled around him, turning over their cash and following his instructions, all in a bid for power. Kelso promises that his organization, Parallax Productions, can lead its members to immense personal power.

Basically, imagine Scientology is real, and not a hoax dreamed up by a sci-fi writer. You’ve got some similar concepts — pneuma and Gatekeepers and other crazy stuff — along with the promise of great power, tremendous secrecy and the requirement to hand over a lot of money. They also tend to go after the people who decline their invitation to sign up for the craziness, and that’s the position Tom finds himself in. Strange things begin to happen and Tom has to ask himself: is this a scam or is it real?

There’s evidence pointing in both directions and the great fun of the book is the way it wavers back and forth. First, we get a tidbit that clearly says it’s a scam; next, something completely inexplicable happens. It’s a good mystery, lots of turns and twists, and plenty of moments where you think you know where it’s going, but you’re wrong. It’s not particularly scary, but there’s plenty of action and lots and lots of questions. This was a fun read that would make a very interesting movie.

My one big criticism is the ending. There’s a bit too much cloak and dagger and then a rather abrupt full stop. There’s a bit of a teaser for a sequel, but it didn’t leave me panting after the next book.

This is Neil McMahon’s first thriller — and it’s a pretty good one. He’s the author of six mystery novels and four fantasy novels (under a pseudonym).

My copy of L.A. Mental

was an advance reader copy, provided free of charge.