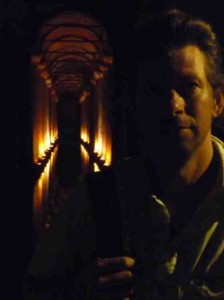 Today, I’ve got a special guest post from author Lars Guignard, talking about his new book, Lethal Circuit. It’s the story of Michael Chase, an American backpacker who becomes the focus of an international manhunt. The book is set in China, which I think is a great backdrop for a thriller: it’s exotic, distant, full of interesting languages and customs and characters. Why did Lars choose it for his setting? Read on…

Why did I set my thriller Lethal Circuit in China?    China is always in the news these days.  It’s supposed to bail out the world economy.  It’s where all the jobs went.  It’s eclipsed the USA as a superpower.   Every headline you read is China, China, China.   So why did I set Lethal Circuit there? The answer is not for any of the reasons above.

I got the idea for Lethal Circuit while in Hong Kong working on a TV show.  I think I need to back up here.  Awhile back I flew from Los Angeles to Hong Kong for the weekend.  It was a long way to go for a short visit, but my wife needed some samples delivered from a Chinese factory and believe it or not, buying me a ticket to accompany here was the quickest and cheapest way of getting them back in time.  So I went to Hong Kong for the weekend with every intention of being back bright and early Monday morning.

The thing was, once I got to Hong Kong I loved it there.  The place was incredible.  The food, the architecture, the 24/7 neon.  The city was an adrenalin rush and I didn’t want to leave.  I was working in Los Angeles as a screenwriter at the time, but my current assignment had me working remotely on a television show that was shooting in Canada.  I owed them a script, but I didn’t need to show up in the office.  So we figured out the thing with the samples, I kissed my wife goodbye, and I planned to stay on for a few weeks in Hong Kong.

Everything went surprisingly well.  I managed to get my drafts of the show I was working on into the production offices, I read their notes, I even had a couple of phone meetings, and other than the fact that I had to be up at odd hours, nobody asked where I was.  Work wise, it was as though I hadn’t left.

But inspiration wise, I was in hyper drive.  I’d done a lot of traveling after college, going around the world more than once with nothing but the shoes on my feet and the backpack on my back.  I’d set that aside to work as a screenwriter in Los Angeles, but I’d always felt a strong wanderlust.  Now, being back in Asia for the first time, I found myself drawn like a magnet to the legions of backpackers I saw crisscrossing Hong Kong.

There’s a global right of passage known as a gap year or year abroad that Americans are just warming up to.  Between high school and college, or college and grad school, or just high school and that first real job, a lot of people worldwide take an extended backpacking tour around the globe.  I knew I had done it, and I was pleased to see that the phenomenon was alive and well.  The thing was, seeing all those backpackers this time, I didn’t just want to join them, I wanted to write about them.

So I started to use my time in Hong Kong to piece together a book.  The first thing was,  I knew I wanted my protagonist to be a backpacker — a low budget traveler taking in the sights.  And I knew I wanted to set the story in Hong Kong and maybe mainland China. My wife was due back to Hong King to meet me in a couple of weeks and we were planning on doing a bit of a tour around the Southeastern part of the country, so I was excited to use that opportunity to check things out.

The second thing was, I wanted to show the real China.  The China that I saw.  Not China filtered through media stories and official sources, but the place I saw in the street. Because I’d already learned that China wasn’t the place that a lot of people thought it was.  Take a Chinese factory.  I’m sure they have huge technological marvels where everybody runs around on sparkling floors with fantastically expensive machinery doing half the work, but the factories I saw were more like your Uncle Joe’s Auto Repair Garage – a few people gathered together in a dusty building making something.

So I figured I would write about things as backpacker would see them from the street level.  This was fiction after all, so I knew my backpacker needed a little more reason to be in China than just the fact that he was seeing the world, so I decided that he was there searching for his missing father.  So I had a character, a backpacker.  And I had setting, the real China, but I’d worked in television long enough to know that even with the element of the missing father, I was still a long way from having a story.

Enter Espionage.  I was leaving Hong Kong and crossing over to the city of Shenzhen in mainland China when it came to me.  The border itself is an incredibly secure affair where you have to go through one set of  immigration agents simply to leave Hong Kong and  another set to enter China.  It was the kind of gritty, fantastically crowded, high tension affair that sparked my imagination.

I’d known people in my past.  People who went to elite universities.  Friends of friends who used to be gregarious, sharing every detail of their lives who had suddenly clammed up.  The girl who went on in extravagant detail about her visit to the doctor or last night’s party was suddenly silent about what she’d been doing for the last three years.  All she’d tell you was that she was working some low level data entry job in Washington, D.C and that she often flew to obscure locations around the globe.  Put that together with the fact she majored in languages, and her parents didn’t have any better idea what she was up to than you did,  and the answer started to take shape – there was a decent probability that she now worked for the CIA.

It was at that moment, in that subterranean border crossing between Hong Kong and Shenzhen, that I knew I had the story for what would become Lethal Circuit.  It would be about a backpacker in search of his missing father in mainland China.  It would feature the real China, the China as I saw it from the street level.  And the whole thing would be tied together by a dangerous thread of espionage.  I crafted Lethal Circuit based on these elements, threw in some cool tech and history, and ended up with what I think is an awesome thriller that’s a fun ride through the Middle Kingdom.

So in the end my two day trip to Hong Kong ended up being a two month stay, but I came back with the first draft of Lethal Circuit, and yes, the TV show got done too.

3 comments for “Guest Post: Lars Guignard, author of Lethal Circuit, on Why China?”