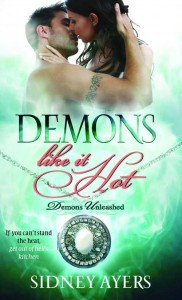 . Sidney is making the rounds for her newest book and I got a chance to ask her about one of my favorite guest post topics: Tell me about your writing process. I love hearing about what authors do — how they get inspired, where they do their writing, what little rituals they have to celebrate or motivate.  Today, Sidney gives us a peek at what gets her creative juices flowing — some of my friends could have used this at the beginning of NaNoWriMo!

I never quite thought of my writing process. I usually just get an idea or a character pop into my head. I can be doing anything—watching TV, getting a pedicure at the local day spa, cooking dinner. One even decided to interrupt my bath time. It pretty much happens anywhere. But I have noticed over the years, that real life situations and people do manage to manifest themselves into my stories. In the first book of the Demons Unleashed series, Demons Prefer Blondes, there was a rather interesting dinner scene with the heroine and her mom. At the time, my mother had been arguing with me about something. (Whatever it was we were arguing about has since slipped my mind. Either way, it ended up being a pretty funny scene with Lucy dealing with a rather naggy mother. I guess it was therapeutic relief from the stress of the argument. Did I mention that my mom is my beta reader? Oops. Luckily she’s a good sport.

I do find myself at the mall people watching. Who doesn’t do that? It’s a great way to get my creative juices flowing, especially if I’m in a slump. It’s fun to come up with stories to match the look on their face or the bounce in their step. Then there was the time I saw a young woman make a wish in the well. I came up with a whole story for that one. Every person you see is unique. It’s that uniqueness that makes a great story.

I try to keep my story as realistic and unique as possible. Demons Prefer Blondes stars a half succubus hairstylist and my December release, Demons Like It Hot stars Serah SanGermano, a caterer with the ability to sniff out the bad demons. I haven’t seen too many paranormals involving Hair stylists and caterers, so I just knew I had to go for it. The next book, however, stars a tattoo artist demon, so it’ll be a little more edgy yet still retain that snarky humor.

Also, Connolly Park, where most the action in my books occurs is actually loosely based on my hometown. It’s a small Midwestern suburb of a moderately sized city. There’s a mixture of urban and rural that gives it an eclectic charm. I mean you can go clubbing one minute and cow tipping the next. I’ll have it known that I have never cow tipped. Not because it’s cruel, but because it just isn’t possible. It’s a myth after all. There is no way to tip a sleeping cow. On the contrary to popular belief, cows don’t sleep standing up. Then again, even if it were possible, the idea of pushing a poor defenseless cow over holds no appeal to me.

The rural part of the town will be examined in further installments of the Demons Unleashed series. Actually, now that I think about it, I’ve already incorporated the rural “aroma” since some of the bad demons have been known to smell like the scent of the fields getting spread, if you know what I mean.

So I guess I have an eclectic process. I do whatever it takes for each story to be magical in its own special way.