Review: Getting Off by Lawrence Block 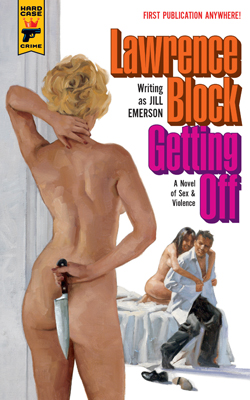 I was really looking forward to reading this book! From the minute it arrived, it sat on the shelf, in the To Be Read pile, and whispered to me every time I walked by. You could tell by the cover that it was going to be racy. There was also the subtitle, “A Novel of Sex & Violence”, to give you a clue. And the publisher — Hard Case Crime. Doesn’t that just sound like it’s going to be a great book? And Lawrence Block’s Getting Off

This is a novel about a female serial killer, but a woman so interesting that sometimes you forget just what she is. She picks up men in bars, takes them home and has sex with them, then she drugs them and kills them. She takes their money, their credit cards, whatever she needs to pay her bills. When she gets bored, she moves on — new city, new neighborhood, new name. She’s been doing some version of that since she left home (and believe me, her leaving home was a story in itself).

Katherine (at least that’s how she starts out) is a woman on a mission. She has decided that she needs to kill every man she’s ever had sex with. Now for some of us — most of us, I would guess — that’s not a really long list, at least not compared to Katherine’s. There are probably hundreds of men on her list, but since she kills most of them, it’s not too daunting. If only she could find them all…

Okay, this is not a book to leave around for the kiddies to read. There are parts that are downright raunchy. (I consider that a plus.) Of course, if you didn’t figure that out from the cover, this is probably not warning enough. Katherine is a very disturbed person, but yet, I almost found myself rooting for her. (In one situation, I was definitely on Team Katherine, although I think she was Missie by then.) And then, just as you’re almost enjoying her exploits, she does something horrible. Something that you can’t overlook. And you’re a little disgusted with yourself for forgetting that she’s a vicious, disturbed serial killer. How can you not love a book you get that caught up in?

The ending…I wondered where Block was going with this one. I didn’t exactly think he had written himself into a corner, but I was sorting through possible scenarios and not coming up with much. It managed to surprised me and I love the way things wrapped up. I’ve come across a lot of books that are great right up to the last chapter, then they fizzle. This delivered a very interesting ending.

This book was originally written under the name Jill Emerson. According to Jill’s webpage, she hasn’t had a book out since 1975! It’s a surprising assortment from a male author, and worth checking out. (If you scroll to the bottom of her webpage, there are links and descriptions of the other novels.)

My copy of Getting Off

was an Advance Reader Copy, provided free of charge. A copy of this went out in the Serial Killer box for my recent Black Friday Giveaway. I hope my winner is enjoying it!