Review: A Train in Winter: An Extraordinary Story of women, Friendship, and Resistance in Occupied France by Caroline Moorehead 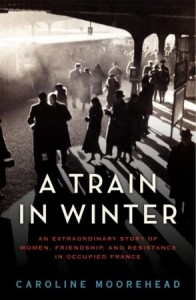 A Train in Winter: An Extraordinary Story of Women, Friendship, and Resistance in Occupied France

is proof that a book can be both heart-breaking and uplifting. It is the the story of the woman behind the French resistance to the Nazis, women who worked in secret, died in secret, and were mostly unheralded for their work. But most importantly, it is the story of their friendship, their camaraderie, and how it quite literally saved their lives.

The story really has 3 parts: the resistance, the camps and the aftermath. It begins in June, 1940, with the German takeover of Paris. It was fairly quiet, the fighting already over and the Nazis simply coming in to take possession of the city. The political climate was charged with controversy — Marshal Petain’s Vichy government more concerned with collaboration and pandering than liberation, a vigorous Communist faction that was strongly opposed to collaboration, and the majority of the French people caught between.

This isn’t history that I’m terribly familiar with, only in a very general way, and the stories and anecdotes about life under occupation were interesting and enlightening. The Germans lived like princes in the best houses, with the best food, while the Parisians stood in ration lines and stuffed their coats with newspaper to keep warm. That’s an excellent way to stir up resentment and resistance, and the existing Communist party — already used to protesting and keeping a low profile — gave it structure.

These women were involved in all sorts of resistance activities. They acted as couriers, sometimes leaving small children at home while they bicycled across the country, carrying money, weapons and anti-German tracts and newsletters. The punishments, if they were caught, could be severe, but at least in the beginning, no one suspected that pretty young women could be political activists and they took advantage of that. They dressed up, they flirted with the German officers, and they flew below the radar for a very long time.

Their bravery was born in part of naivete. They simply could not fathom that the Germans would imprison or execute them. They expected to be arrested, to be interrogated, to be held for short periods of time, but they seemed certain that no one would imprison a mother with young children — who would do such a thing? So while I commend their bravery, I sometimes cringed at their foolishness.

Eventually, they were rounded up, a result of intensive efforts by the German police and the French collaborators. They made their way through a series of more and more serious incarcerations and increasingly dismal conditions, before being shipped off to Poland, to the fort at Romainville, and eventually to Auschwitz. they would eventually become known as Le Convoi des 31,000. There were 230 women from all walks of life: students, chemists, writers and housewives; schoolgirls, an opera singer, a dentist. Only 49 would survive.

What you see most clearly is that this was not survival of the fittest; this was survival of the most cohesive. their friendship literally saved their lives. In Auschwitz, the weakest were pulled out of lines and executed. The women of Le Convoi protected their wick and injured. They pooled their food. The risked their lives to keep the others safe. They conspired to steal food and medication, at great personal risk. They found hiding places for the injured, to keep them out of the sight of the Nazis. They kept each other’s spirits high and provided what comfort they could, in conditions most people cannot imagine.

They came home to a mixed welcome, not unlike our returning Vietnam vets, years later. The country had changed and they had changed. People did not really want to hear about their suffering — they wanted to forget and get on with their lives. And when Charles de Gaulle and the French government celebrated the heroes of the resistance, the women were mostly forgotten…but they never forgot each other.

I can’t easily express how moved I was by this book. Women form friendships differently than men, I think, and we nurture them in different ways. Quite simply, without their friends, these women would have died. They lived because they had friends to rely on, and they placed tremendous importance on the group surviving to tell their story. Selfishness and looking out for number one would have meant certain death.

Countless times throughout the book, the women sing to lift their spirits and to show their resistance. The Marsellaise, the French national anthem, is sung so many times in the book that I caught myself humming it as I read. So I thought I would end this with the perfect example of the power of this song, a scene from the 1942 film, Casablanca.

My copy of A Train in Winter: An Extraordinary Story of Women, Friendship, and Resistance in Occupied France

was an Advanced Reader Copy, provided free of charge

1 comment for “Review: A Train in Winter: An Extraordinary Story of women, Friendship, and Resistance in Occupied France by Caroline Moorehead”