I only got 2 new books last week (good news, because I need to get caught up on my reading), but they both look terrific.

New York City is subsumed in arctic winds, dark nights, and white lights, its life unfolds, for it is an extraordinary hive of the imagination, the greatest house ever built, and nothing exists that can check its vitality. One night in winter, Peter Lake–orphan and master-mechanic, attempts to rob a fortress-like mansion on the Upper West Side.

Though he thinks the house is empty, the daughter of the house is home. Thus begins the love between Peter Lake, a middle-aged Irish burglar, and Beverly Penn, a young girl, who is dying.

Peter Lake, a simple, uneducated man, because of a love that, at first he does not fully understand, is driven to stop time and bring back the dead. His great struggle, in a city ever alight with its own energy and beseiged by unprecedented winters, is one of the most beautiful and extraordinary stories of American literature.

I’ve also heard that a movie is in the works, so I can’t wait to start on this one! This I bought for my personal library.

Next, I got my latest Early Reviewer book from LibraryThing.com, The Last Kind Words 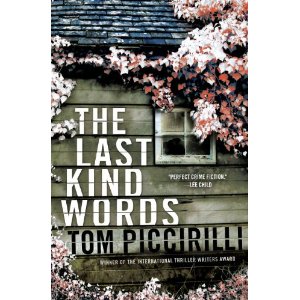 Raised in a clan of small-time thieves and grifters, Terrier Rand decided to cut free from them and go straight after his older brother, Collie, went on a senseless killing spree that left an entire family and several others dead. Five years later, and days before his scheduled execution, Collie contacts Terry and asks him to return home. He claims he wasn’t responsible for one of the murders–and insists that the real killer is still on the loose.

Uncertain whether his brother is telling the truth, and dogged by his own regrets, Terry is drawn back into the activities of his family: His father, Pinsch, who once made a living as a cat burglar but retired after the heartbreak caused by his two sons. His card sharp uncles, Mal and Grey, who’ve recently incurred the anger of the local mob. His grandfather, Old Shep, who has Alzheimer’s but is still a first-rate pickpocket. His teenage sister, Dale, who’s flirting with the lure of the criminal world. And Kimmy, the fiancée he abandoned, who’s now raising a child with his former best friend.

As Terrier starts to investigate what really happened on the day of Collie’s crime spree, will the truth he uncovers about their offenses and secrets tear the Rands apart?

How about you — anything new on your bookshelf?