Review: The Code by G.B. Joyce 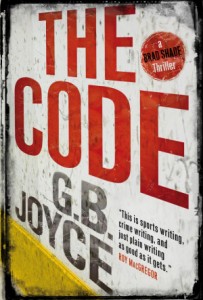 This is a tough review to write. The Code

, by sportswriter G.B. Joyce, has a lot of things that I love — a good mystery, a flawed hero, and a bit of action. But it is all somehow a bit awkward.

First, the story: Brad Shade is a former hockey player with a sad-luck story, now a scout for the team in L.A. While scouting a particularly hot young prospect, a beloved coach and team doctor are brutally murdered, and while Shade isn’t a suspect or even a witness, his scouting duties keep leading him back around to the investigation. To get the story on his prospect, he may have to solve the murder.

For the most part, I enjoyed the mystery, although it’s a little slow to get started. For the first 150-200 pages, the murder is peripheral — Shade isn’t even questioned by the police — it sort of lurks in the background, and while the scouting stuff was interesting, it wasn’t riveting. But the story keeps circling back, the murder always in the background, the questions surrounding the deaths always kind of caught up in the questions surrounding Billy Mays Jr., the hot prospect, always on the back burner. The story builds to a showdown on the floor of the NHL draft that is worthy of any courtroom drama.

I did have some problems with the book. First, the jargon. Insider jargon can be a great tool. It can make people feel like part of the club, people in the know, sharing the little inside jokes and shortcuts, but that only works if they understand it, if you provide some context. I shouldn’t have to go to Wikipedia to figure out what a major junior is. Early on, I got frustrated and called up my Secret Hockey Source (also a professional sports writer/editor who knows a LOT about hockey), to get a few questions answered. Unless you want your only readers to be hockey fans, you need to give them some explanation of why a 17 year old kid is playing on a team alongside a Russian professional player. (The answer: major junior leagues are a bit like baseball minor leagues and the traveling soccer teams you see in the US. More than a high school team, but not quite the pros.) Shade makes several references to his “old friend Arthur” before I figured out he was talking about his arthritis. (I couldn’t find anyone who had heard that nickname in years.) Instead of letting the jargon bring me into the story, it made me feel excluded.

The other thing I really had a problem with: the title. I hate titles that seem to come out of nowhere, and this one really did. Late in the book, a sportscaster made a reference to The Code (basically, the unwritten code regarding player conduct on the ice) but it still doesn’t tie into the story for me. Not only that, it’s a title that’s been used before. When I was chatting with my Secret Hockey Source, she originally thought I was talking about The Code: The Unwritten Rules of Fighting and Retaliation in the NHL

; she couldn’t figure out why I thought it was so “mysterious.” Using the title of another well-known book is kind of a no-no, especially one so close to your subject matter.

Overall, not a bad book. I was interested in the snapshot of life as a hockey scout, and that’s far more the focus of the book than the murder. The murders are a side note — Shade was not really involved in the investigation, except as it concerned the player he was scouting. He doesn’t set out to solve the murders, and you don’t get the feeling he would care one way or the other, if it wasn’t for the fact that his team is going to invest millions in this player. It’s a fun book for hockey fans (and if you aren’t a fan, it helps to have a Secret Hockey Source, for when you get stuck). I wouldn’t be opposed to giving Joyce’s fiction one more try, but I hope next time around he’s more invested in the actual mystery.

My copy of The Code

Review: I Shouldn’t Be Telling You This – Success Secrets Every Gutsy Girl Should Know by Kate White
Giveaway: To Kill A Mockingbird book and movie tickets!

2 comments for “Review: The Code by G.B. Joyce”