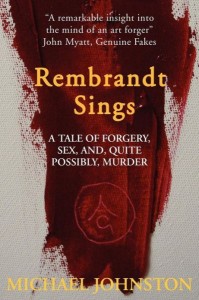 This afternoon, I’ve got a sneak peek from the new novel by Michael Johnston – Rembrandt Sings: a Tale of Forgery, Deceit, Sex and, quite possibly, Murder

. Here’s a little about the novel:

Ambitious art historian Bill Maguire searches Paris for a subject for his doctoral thesis and follows up faint clues about once famous abstract painter Alexander Golden. He finds himself in Carmel listening to the death-bed confessions of Joe Rembrandt, an art forger on an industrial scale, and meets beautiful Anna Glover whose life seems somehow connected with the dying man.
But when Anna’s lawyer boss completely debunks Rembrandt’s story, he decides it’s time to get out and write his thesis. Unable, however, to get out of his mind Joe’s assertion that he found where Golden disappeared to with his mistress and a cache of his never-before-seen canvases that could be worth millions, Bill searches around Arles for Golden’s farmhouse hideaway that probably never existed outside Rembrandt’s imagination.

He finds Anna there before him and hears yet another version of Joe’s story. Together, they make the discovery that adds love, greed, insanity, academic dishonesty and very likely murder into the mix before leading to a completely unforeseen outcome.

Now, you can click on the title above to purchase a copy, and click on the link below, to read a one chapter preview.

Michael Johnston was born in Leith in 1936 and grew up in the Scottish Borders. At school he was bookish and not keen on rugby. In 1950, he auditioned for the BBC and read a story on Children’s Hour. Leaving school he studied Textile Design but, in 1953, he also auditioned for the BBC Younger Generation programmes and for the next five years worked as an occasional freelance interviewer, presenter and question panel member.

In 1955, he spent a summer working in France. He used his BBC experience to arrange an interview with Françoise Sagan, then a teenage French novelist, which was part of a radio documentary he recorded, wrote and presented. He went on to write several radio documentaries for the BBC including one about the relatively unknown romance between Lord Thomson, Secretary of State for Air in Ramsay MacDonald’s cabinet and the Rumanian novelist, Princess Marthe Bibesco, in which the actress Janet Suzman played the leading role.

In 2001, he embarked on his too long postponed ‘career’ as a novelist and a programme of study with the Open University culminating in a first class BA (Honours) in Literature.

In 2009, Michael was awarded an MA (with Distinction) in Modern and Contemporary Literature by Birkbeck College, University of London. His dissertation was on the impact of Margaret Thatcher on contemporary fiction.

His latest novel ‘Rembrandt Sings‘ is available in print or on Kindle and has received excellent reviews. To find out more about Michael and his book visit his website at www.akanos.co.uk