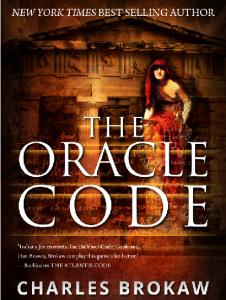 No need to check your calendars — this is a bonus, middle-of-the-week Guest Post! (And don’t worry, I’ve still got one coming on Friday.) Today, I have Charles Brokaw, author of The Oracle Code

, the fourth book in the Thomas Lourds series. The book was described to me as “Indian Jones meets National Treasure” — that sounds like it’s going to be interesting! When a book covers so much interesting international territory, I always wonder how familiar the authors really are with the places they write about, and Mr. Brokaw talks to us today about some of the fascinating locations in his newest book:

The Thomas Lourdes series has always provided me with the opportunity to write about not only some of the most interesting history in the world, but some of the most desirable destinations. Exploring ancient cities is one of the favorite parts of what I do as a writer. These places have so much history, ancient history, and so many stories hidden underneath their sand. It’s no wonder that heroes like Indiana Jones have always captivated audiences. Digging for buried treasure in areas that had thriving civilizations thousands of years ago is not only inspiring, but also exciting.

While a linguist’s or archaeologist’s job isn’t necessarily always seen as the most adventurous job in the world, my work in the academia has allowed me to research topics that are known by few. These topics do not entirely lead outside of the academic world, and create very exciting concepts for a novel. The history of civilizations and archeology is so rich that it is almost too easy to find a story to tell in there. The fact that no one knows the final resting place of Alexander the Great has always fascinated me and I thought it would make an excellent premise for the next Thomas Lourdes adventure. It also allowed me to write about cities that are inherently historically and culturally rich, so each one could have a novel of its own.

Afghanistan
This is where the original discovery is made that starts Thomas Lourdes on the hunt for the tomb of Alexander the Great. Herat Province in Afghanistan is where all the action begins, a remote area on the edge of the country where the sand is full of surprises. It began as a part of the Persian Empire and since then, has been accumulating treasures that  archeologists have been hunting for centuries. I spent a few months there while I was on sabbatical and was never at a loss for something to explore. It was where the first inspiration for The Oracle Code hit me.

There is so much action that can be written in this country, like facing down a group of Taliban in the middle of the desert or hiding out in a US army training compound. The scenes that take place in the cities of Herat or Kandahar where I could describe the food were especially fun to write. The time I spent in Afghanistan gave me a deep appreciation for the culture and the people there. It is a beautiful and fascinating country.

Moscow
The Russian people are passionate about their country and intensely nationalistic. But there is also a lot of inter-generational tension in Russia right now between those faithful to the old regime and those who are passionate about the necessity of capitalism. The tension between these two sides can rip apart families. I wanted to communicate that through the characters. On one side, you have the hardened Russian General who works closely with a corrupt president bent on bringing back the old regime. But the General’s daughter, a feisty reporter, disagrees with everything her father does for the government and it brings their relationship near to ruin. Yet both are incredibly dedicated to Mother Russia.

Greece
I could probably write a whole series about archaeological adventures that take place in Greece. For The Oracle Code

, I focused on Delos, an island where Aristotle purportedly took Alexander the Great when he was a child in order to engender him to the Grecian way of life. This island was seen as a holy sanctuary for a millennium before the Greeks proclaimed it the birthplace of some of their most revered gods. During the Greek empire, no one was allowed to live there. It was an island specifically for temples and offerings to the gods. So as you can imagine, there is quite a bit of history there as well and the perfect background for an archaeological adventure.

My academic research takes me to many fascinating places across the globe and gives me not only the inspiration for Thomas Lourdes adventures, but also a historical and cultural framework within which to place them. If anyone has plans to visit these cities, make sure you take time to explore the museums and historical artifacts from the area. Mysteries are waiting to be discovered in these countries.