Interested in a free book? Check out Broken Angel 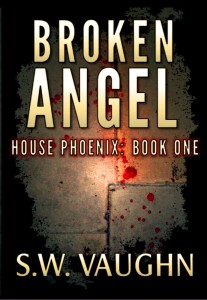 Today, I’ve got a spotlight post for Broken Angel by S.W. Vaughn. Currently, the book is available FREE for Kindle on all Amazon sites!

Click here for a free copy of Broken Angel

Now, for a little about the book:

Book Spotlight: Broken Angel: A thriller by S.W. Vaughn – Free for your Kindle!

No rules. No limits. No escape.

Gabriel Morgan is looking for a secret society, known only by a symbol — a five-colored star. Rumors whispered through the New York City underground speak of drugs, deadly deals, and high-class prostitution. But the society’s main draw is a vicious blood sport fought in a ring with no rules, where millions change hands at every match.

Their fighters are legendary, their leaders cold and ruthless. They are impossible to find, unless you already know where they are.

And they have Gabriel’s sister.

But when he finally hunts down the leader of the society’s Manhattan division, the nightmare is just beginning — Gabriel is taken prisoner along with his sister and forced to fight for her freedom. He is branded with ink, broken and trained by the best of their fighters, and must accept a new identity along with a new name.

And in the ring, he’ll do anything to win . . . because the price for losing is his sister’s life.

Praise for the suspense thriller Broken Angel: Book One in the House Phoenix series

“This book was truly magnificent. I could smell the sweat and blood in the ring. Hear the jeers of
the audience, and feel the crunch of bone beneath my fist. Vaughn is very good at pulling out the
details with stark words and feelings.”
–Jessie Potts, USA Today reviewer (excerpted from Bitten By Books review)

Gabriel entered a room half the size of the building, walled with more gray cement. Several heavy bags hung from the ceiling, and a collection of weight machines lined the left wall. A large, roped sparring ring with a black mat floor dominated the far right corner. There were a few warm-up benches and an open door that appeared to lead to a locker room.

Slade pulled the door closed, then reached for the ever-present phone, dialed, and said, “We’re waiting.” He snapped it shut and regarded Gabriel, who stood rigid and mute, hands clenched at his sides.

“I’ll make this easy for you,” Slade said at last.

Gabriel couldn’t suppress a snort. Easy? It would be easier for him to cut off a limb or two with a butter knife than it was to submit to this man, to do his bidding and pretend everything was just fine, thank you.

Slade ignored his sarcasm. “Regarding my terms for your release, and your sister’s. I’ve calculated the amount of money Lillith would bring in should she remain in my employ. I’ll spare you the details of how I arrived at this figure—” He paused to measure the effect his words had. “—but the final tally is ten million dollars.”

“You pulled that number out of your ass.”

“I never guess when it comes to money, Mr. Morgan.” Slade’s blue eyes leveled coolly on him. “I am a businessman, and I deal in profits. Now, if you’d like me to review exactly how much your sister commands per client, or how many years I expect her to last until she’s…”

“Ten million dollars,” Slade repeated, emphasizing every word. “That is the price of Lillith’s freedom. You fight for me, you earn me ten million dollars, and then you and your sister are free to go. Unless, of course, you happen to have that much money on you?” He laughed at the black look Gabriel sent him. “No. I didn’t think so.”

Get your free copy here!

2 comments for “Interested in a free book? Check out Broken Angel”