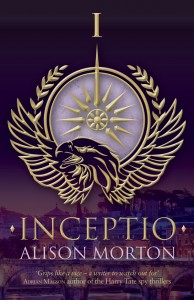 I know it’s not Friday, but I’ve got a bit of a double-whammy for you today! First, I’ve got a guest post from Alison Moton, author of Inceptio

. Once you read Alison’s post about alternate realities, be sure to click through for one-chapter Sneak Peek that you can download! That should make for some great reading, right in the middle of the week.

First, the guest post. Next, a little about our author. Finally, the sneak peek. Happy reading!

What if English King Harold had won the Battle of Hastings in 1066? Or if Julius Caesar had taken notice of the warning that assassins wanted to murder him on the Ides of March? Or if George Washington hadn’t crossed the Delaware River on Christmas night in 1776? The course of our history would have been so different, we might not even be here.

Sometimes, little things like a missed appointment, a delivery not made or an interrupted meeting can trigger changes that produce an alternate timeline. In the film Sliding Doors, when the train door shuts and Gwyneth Paltrow’s character splits into two, one version of the character rides away on the train to an alternative life, the other is left standing on the platform.

Change in a personal story can have a national impact – the so-called ‘butterfly effect’. In my book, INCEPTIO, Roma Nova has battled its way from a small colony of traditional Romans in the late fourth century to become a high tech, 21st century financial mini-state which retained and developed Roman Republican values, but with a twist. These few hundred people trekking north sixteen centuries before has altered the rest of the world. The thriller story of INCEPTIO takes place against this background.

Historical novel writers reach into the past not only by researching a period in meticulous detail, but also by imagining what the characters see, smell, eat and touch in their everyday world. If you set your story in a different country, you can visit the places the characters would live in, smell the sea, touch the plants, walk under the hot blue sky, or freeze in a biting wind.

But if you invent that place, then your task is doubled. You have to get the geography and history of your imagined country right as well as the social, economic and political development; this sounds dry, but every living person is a product of their local conditions.

The key is plausibility. Take a character working in law enforcement. Readers can accept cops being gentle or tough, enthusiastic, intellectual or world-weary. Law enforcers come from all genders, classes, races and ages and stand in different places along the personal morality ruler. But whether corrupt or clean, they must act like a recognisable form of cop. They catch criminals, arrest and charge them and operate within a judicial system. Legal practicalities can differ significantly from those we know, but they must be consistent with that society while remaining plausible for the reader. But a flashing blue light or an oscillating siren on a police car is a universal symbol that instantly connects readers back to their own world.

Almost every story written hinges on implausibility – a set-up or a problem the writer has purposefully created. Readers will engage with it and follow as long as the writer keeps their trust. One way to do this is to infuse, but not flood, the story with corroborative detail so that it verifies and reinforces the original setting the writer has introduced.  Even though my book is an alternate history thriller set in the 21st century, the Roma Novan characters still say things like ‘I wouldn’t be in your sandals  (not shoes) when he finds out.’  And there are honey-coated biscuits (honey was important for the ancient Romans) not chocolate digestives in the squad room.

However unfamiliar the time and place, the characters should display normal behaviour. Human beings of all ages and cultures have similar emotional needs, hurts and joys. Often they’re expressed differently, sometimes in an alienating or (to us) peculiar way. But a romantic relationship, whether as painful as in The Remains of the Day or as instant as Colonel Brandon when he sees Marianne in Sense and Sensibility or the careful but intense relationship of Eve Dallas and Roarke in J D Robb’s Death series set in 2057 New York, binds us into their stories.

Blending the recognisable with the unusual in an alternative version of reality is tricky, but fun for the writer. But for the reader, it stretches out an invitation to visit a place they never dreamed existed. And how easy is that to resist?

Alison Morton grew up in West Kent and worked as a civil servant in the City of London, dealt in coins and antique jewellery, head-hunted chief executives, served as a Territorial Army officer and owned a translation company. She completed a BA in French, German and Economics and thirty years later an MA in History. She now lives in France with her husband.

A ‘Roman nut’ since age 11, she has visited sites throughout Europe including the alma mater, Rome. But it was the mosaics at Ampurias (Spain) that triggered her wondering what a Roman society would be like if run by women…

A wordsmith much of her life – playwright (aged 7), article writer, local magazine editor and qualified translator – she came to novel writing in reaction to a particularly dire film: ‘I could do better than that,’ she whispered in the darkened cinema.

‘So why don’t you?’ came spouse’s reply.

Three months later, she had completed the first draft of INCEPTIO.