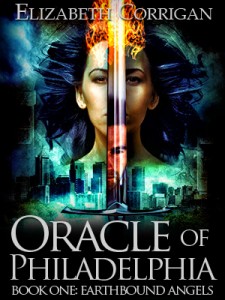 If it’s Friday, there must be a guest post! Today, I’ve got Elizabeth Corrigan, author of Oracle of Philadelphia:

Carrie works at a diner in South Philadelphia, dispensing advice to humans and angels wise enough to seek her counsel. But there are some problems that even the best advice can’t solve. Her latest supplicant, Sebastian, is unique among those who have sought her aid. He sold his soul to a demon in exchange for his sister’s life, but his heart remains pure.

Carrie has lived for millennia with the knowledge that her immortality is due to the suffering of others, and she cannot bear to see another good man damned when it is within her power to prevent it.

In order to renegotiate his contract, Carrie must travel into the depths of hell and parley with the demons that control its pathways. As the cost of her journey rises, Carrie must determine how much she is willing to sacrifice to save one good soul.

Now, how about a little bit from the author? Elizabeth shares with us the most important decision of her writing day…

When I sit down to write each day, I must make a very serious choice: Do I stay home or go to Starbucks?

Obviously the ideal would be to go to a small indie coffee shop where I could support a local business and fair trade coffee, but sadly there is no such locale within easy walking distance of my apartment. Perhaps if I had my urbanite sister’s concept of what constitutes “within walking distance,” I could make my way up to the library coffee shop. Unfortunately, the one time I ventured in there, the cupcake I ordered made last year’s Tastykakes look fresh, and my not-particularly-large mocha options were “dark” or “cinnamon.” Since my preferred flavor is “white,” I was unimpressed by their exotic selections. So you can see how Starbucks is my preferred option.

There are a number of distinct advantages to going to Starbucks over staying home. First, I at least get some nominal exercise, which cannot be underestimated, considering that I am prodigiously lazy and often “forget” to order my mocha with skim milk. And of course, I cannot underestimate the bonus to writing I get by achieving the pretentious writer stereotype. I look around at all the other people in the coffee shop and think how impressed they would be that they’re sitting next to a novelist. Granted, I never actually talk to any of these people, and mostly they would rather I not be sitting there at all so that they could use my chair to keep their bags on. But I can at least imagine that when I make a million dollars, the local Starbucks can advertise that I wrote there when.

There are, of course, down sides to Starbucks, not the least of which is the very people I go there to impress. There are only six tables and a few stools, most of which are usually occupied by others who are trying, like me, to achieve the coffee shop aesthetic. Meanwhile, I am subjected to a variety of eclectic musical selections that Starbucks feels will be of interest to savvy coffee drinkers like myself, which can range anywhere from “Huh, I’ll have to see who sings this” to “Oh, dear caffeine gods, make it stop.”

If I work at home, on the other hand, I get to pick the soundtrack. I have a special playlist for each book that features my theme songs for each character—“Hero” by Chad Kroeger for Carrie in Oracle of Philadelphia, “Flagpole Sitta” by Harvey Danger for Bedlam—and assorted other songs, many of which are actually mentioned in the book, that remind me of scenes. At home I can also save myself the cost of frou-frou latte drinks and instead imbibe Diet Coke in quantities likely not encouraged by the FDA. My apartment also has the advantage and disadvantage of cats, who act intermittently as lap-warmers and random keystroke operators.

But of course the real question is where do I write better? The jury on that is not yet out. I shall continue to experiment until a conclusion is drawn. So long as no one expects me to write without caffeine.