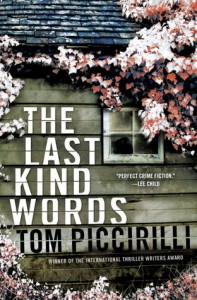 I was caught up in the book from the very first chapter. Terrier Rand comes from a family of thieves – burglars, second-story men, con artists and grifters. (All named after breeds of dog, for reasons that are never fully explained.) His brother, Collie, is on death row after a killing spree that included an elderly couple and a nine-year-old girl. Terry hadn’t planned to come home for the execution, but his brother has a last request.

by Tom Piccirilli is the story of that last request and the story of Terry coming to terms with his family. After his brother’s conviction, in the midst of his own personal crisis, he left town, ran away from his problems. Coming home, he can’t make things right; it’s just too late to be there for the one person who really needed him. He has to face the fact that other people suffered for his cowardice. His brother can still push all his buttons — he knows just what to say to get Terry to do what he wants. It’s really not all that difficult: Terry wants to understand what Collie did, wants some sort of explanation. First, though, there’s a question of the one murder that Collie swears he did not commit.

You can’t help but root for Terry and love his family just a little. The names — Terrier; Collie; their father, Pinscher; their uncles, Malamute and Greyhound; his grandfather, Shepher — are enough to draw you in. The open and honest way they approach their completely dishonest living is kind of charming and everyone in town knows who and what they are. Terry makes some terrible decisions, but there is enormous pressure on him, with the upcoming execution, concerns about his sister, his ailing grandfather and an uncle in trouble with the mob. He’s clearly trying to do the right thing, even without a clear idea of what the right thing might be, but he’s torn and fighting his instincts to run, like he did before. This time, he has to see things through to the end.

I really enjoyed the novel, over all. I was really engrossed in Terry’s family struggles, particularly his dealings with his teenage sister. It’s got to be tough growing up in such a notorious family, and a 16 year old does not want her runaway older brother coming home, trying to save the day. The failing health of his grandfather and uncles  is disturbing, as it is for all of us who are watching family members grow old. For men like these, what do you do when you can’t do the thing you’ve done all your life? Most of all, Terry’s final words to his brother surprised me. It was one of those scenes where you don’t know what you were expecting, but this wasn’t it. Overall, a very good read.

The title puzzled me until the end of the novel.

When the priest turned to go, I reached out and grabbed him by the wrist.

“The last kind words ever spoken to Jesus were spoken by a thief.”

“We were the first let into heaven. Thieves are pardoned.”

For Terry’s sake, you hope that it’s true.

My copy of The Last Kind Words

was provided free of charge through the LibraryThing Early Reviewers program..

1 comment for “Review: The Last Kind Words by Tom Piccirilli”