Two new books this week to talk about. First is one I am very excited about – the next Christopher Meeks novel, Blood Drama, coming out in June. I have reviewed a couple of Meeks’ novels before – months and seasons and Love at Absolute Zero – so I am looking forward to reading this one: 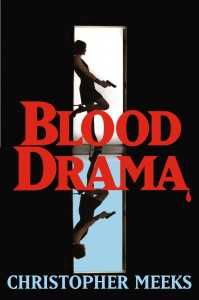 Everyone has a bad day. Graduate student Ian Nash has lost his girlfriend in addition to being dropped from a Ph.D. program in theatre at a Southern California university. When he stops at a local coffee shop in the lobby of a bank to apply for a job, the proverbial organic matter hits the fan. A gang of four robs the bank, and things get bloody. Ian is taken hostage by the robbers when the police show up. Now he has to save his life.

FBI Special Agent Aleece Medina’s analysis of the bloody bank heist drives her into the pursuit of a robbery gang headed by two women. She doesn’t anticipate how this robbery will pit her against both the bandits and the male higher-ups in the FBI while the media heats up during a giant manhunt.

The robbers are about to kill Ian, and all he has at hand is his knowledge of the stage.

My second new book is from the folks at Tor/Forge. It’s another novel from the husband and wife team, Aimee and David Thurlo, called a Time of Change. It’s part of their Ellie Clah crime series – not one that I’ve read, but I do love a good crime story: 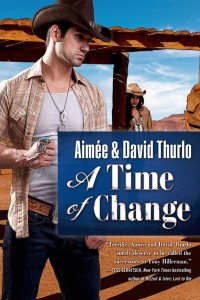 A Time of Change introduces readers to Josephine Buck and other employees at a New Mexico trading post. When The Outpost’s owner dies, Josephine, a young Navajo woman, is shocked to discover that Tom Stuart, whom she thought of as a surrogate father, has left her the business.

Ben Stuart and his dad had had problems, but military service changed Ben for the better and put the two men back in each other’s lives. His father’s sudden death ends any possibility of a true reconciliation and leaves Ben fuming at being disinherited.

Suspecting that Jo had an affair with his father, Ben is determined to get control of the trading post. Jo’s hataalii training shows her that Ben is wounded in both body and soul, and she becomes determined to help him.

As Jo and Ben move toward a deeper understanding of each other, they learn that Tom Stuart was murdered and that the trading post at the center of their lives holds many secrets.