I’ve got more new books this week! (When don’t I have new books?) Here are a few that you’ll be seeing pop up in Tuesday Teasers and reviews:

First up, Mending the Moon 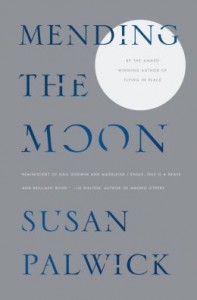 Back in her hometown of Reno, Nevada, she leaves behind her adopted son, Jeremy, whom she rescued from war-torn Guatamala when he was a toddler—just one of her many causes over the years. And she leaves behind a circle of friends: Veronique, the academic stuck in a teaching job from which she can’t retire; Rosemary, who’s losing her husband to Alzheimer’s and who’s trying to lose herself in volunteer work; Henrietta, the priest at Rosemary’s and Melinda’s church.

Jeremy already had a fraught relationship with his charismatic mother and the people in her orbit. Now her death is tearing him apart, and he can barely stand the rituals of remembrance that ensue among his mother’s friends. Then the police reveal who killed Melinda: a Seattle teenager who flew home to his parents and drowned himself just days later.

It’s too much. Jeremy’s not the only one who can’t deal. Friendships fray. But the unexpected happens: an invitation to them all, from the murderer’s mother, to come to Seattle for his memorial. It’s ridiculous. And yet, somehow, each of them begins to see in it a chance to heal. Aided, in peculiar ways, by Jeremy’s years-long obsession with the comic-book hero Comrade Cosmos, and the immense cult of online commentary it’s spawned.

That sounds so sad, but with the potential for some great storytelling. 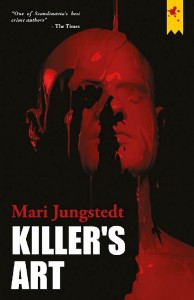 A cold Sunday morning, a man is found murdered and hanged on the old city wall that surrounds Visby, capital of Gotland. The victim is art gallery owner Egon Wallin. When the famous painting “The Dying Dandy” is stolen in Stockholm, disturbing links to the murder of Egon Wallin slowly start to surface, taking the reader right into the exquisite Swedish art world and underworld of prostitution and drugs.

Killer’s Art is set in the picturesque yet uncanny island Gotland, the Swedish equivalent to Martha’s Vineyard. In this hair-raising story, superintendant Anders Knutas is facing one of the toughest investigations in his career.

I have been reading a lot of Scandinavian mysteries and thrillers. There is definitely something intriguing about the new locations and characters.

Finally, Me on the Floor, Bleeding 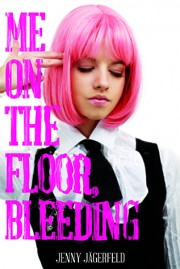 High school-outsider Maja would never hurt herself on purpose as her dad, teachers, and classmates seem to believe. Can’t a person saw off the tip of her thumb without everyone starting to worry? That is, everyone except Maja’s mum, who worringly seems to have disappeared from the face of earth.

Crashing a neighbour’s party, Maja meets twenty-year-old Justin Case, a super-verbal car mechanic with pink pants, who makes her forget everything about absent mothers and sawn-off thumbs, at least temporarily. But then Maja hacks into her father’s email account and reads an email that hurts more than all the electric saws in the world.

Now, this isn’t one I requested, and I don’t know if it will make the TBR stack. I generally don’t read romances and I am not interested in YA novels. If you’re interested in reading this one and posting your review here, drop me a line!