by Lisa on August 8, 2013 in Book Review, Memoir/Biography, Nonfiction • 1 Comment 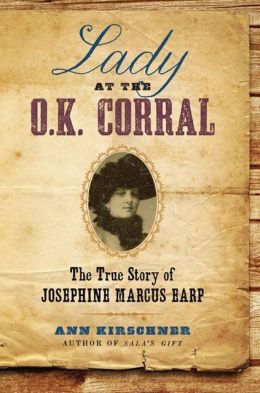 Did you know that the gunfight at the O.K. Corral was really fought over a woman? That’s not entirely true, but it’s a big part of the story and one that I had never heard before. In Lady at the O.K. Corral: The True Story of Josephine Marcus Earp

, Ann Kirschner tells a story of the Wild Wild West that was completely new to me. This is the story of the woman who hitched her wagon to one of the West’s most famous characters — and it’s not at all what I expected.

“Did you know Wyatt Earp was buried in a Jewish cemetery?”

I didn’t know that, and I completely understand why that tidbit drew Ann Kirschner into a place she called “Planet Earp” – the story of Wyatt Earp and his wife, Josephine Marcus Earp. Josephine was a Jewish girl from San Francisco who longed for adventure. Her sisters led pretty traditional lives – marrying and having children, remaining in the Jewish community – but Josephine ran away from home at 18 and traveled to Arizona looking for fame and fortune in the theater. By all accounts, she was a lovely young woman (the author compares her to a young Penelope Cruz), and she certainly got the attention of the men in Tombstone. For a time she lived with Johnny Behan, sheriff of Tombstone, and he introduced her as his wife. She shared his home and cared for his young son, but he never delivered on his promise of marriage. Her resentment of Johnny may have pushed her right into the arms of his biggest rival, Wyatt Earp.

One of the things I found interesting about Lady at the O.K. Corral is the view it presented of the Wild West. That’s a time I always think of as pretty puritanical; sure, there were prostitutes in the western boomtowns, but I expected more proper behavior from average citizens. Josephine lived with two men, without marriage, and while there were some social consequences those were due more to her husband’s involvement in saloons and liquor and prostitution than her lack of a wedding ring. Josephine left home at 18, lived to be 84 years old and in that time she never had a permanent address! She lived with Wyatt Earp for 47 years, traveling all over the West, up to Alaska, through the deserts of Arizona and down to Mexico. They ran saloons, sold liquor, drilled oil wells and panned for gold.  I particularly loved the stories of Wyatt and Josephine’s time in Alaska, when Nome was nothing but a stretch of beach and gold fever swept over the country. It was a thrilling time in our history and I have never seen the story told from that perspective, of a woman in the midst of it all, moved along by the tides of people and events, and thriving.

“The beach was barely visible beneath thousands of tents that almost touched each other, leaving the narrowest of passageways between them. Small mountains of worldly goods broke the line of tents, each pile challenging its owner to carry it away faster than a thief or a storm. Hundreds of dogs raced furiously about. Baggage and freight were piled high on the beach for a distance of several miles: a jumble of pianos, coal, narrow-gauge railway tracks, lumber, tents, stacks of hay, bar fixtures, washtubs, roulette wheels, stoves, liquor, sewing machines, and mining apparatus.”

Although their relationship seems to have been a very happy one, she was always haunted by her secrets and her status – no marriage (although they often lied about it, claiming to have been married on a friend’s yacht), and with the fear that people would find out about Wyatt’s first wife. In her later years, Josephine was a difficult woman; she was ferocious when it came to protecting Wyatt’s legend and reputation, and that made her more than a few enemies. She never inspired the love and affection that her famous husband did and Kirschner did a good job of bringing her to life for the reader. It’s hard to imagine a man and woman going from Wild West gunfights to working on Hollywood movie sets, but here it ties together easily, and I found myself feeling a lot of sympathy for Josephine in her decline.

Lady at the O.K. Corral: The True Story of Josephine Marcus Earp

is a great book for those interested in the true story of our Wild Wild West. Most of those stories are told about the men of the West, but they weren’t living out there alone; I found the story a fresh angle on a well-known story.  My copy of Lady at the O.K. Corralwas an Advanced Reader Copy, provided free of charge.

One final note: I went looking for photos of Josephine and I came across this picture (linked because it’s a bit racy). Not what I expected to see (and a bit more than I expected to see!), and there is an interesting story behind it. Check out the story here.

1 comment for “Lisa’s Review: Lady at the O.K. Corral: The True Story of Josephine Marcus Earp by Ann Kirschner”