Review: Man in the Empty Suit by Sean Ferrell 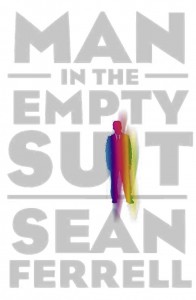 It’s kind of a funny thing. When I was telling some bookish friends about The Man, one of them commented that they hate it when books break all “the rules” of time travel. Seems silly to me – how could time travel have rules? Sean Ferrell’s Man in the Empty Suit

breaks all the rules of time travel and has some fun doing it.

This book is really split into two parts. In the first half,  our time traveler attends his birthday party. Every year, he throws himself a party in an abandoned New York hotel. Attending this party are all the various versions of the traveler, every year since he gained the ability to time travel. Now, that’s not supposed to happen, right? If you run into yourself in the past, isn’t that like matter and anti-matter? But here, it works. Here, there are new rules:

3. If it broke before, let it break again.

6. No one is younger than the Inventor.

8. Try not to ruin the fun for the Youngsters.

15. Don’t come back until you have aged a full year.

Imagine that – having a birthday party with all the ages of yourself that came before and will come after. I imagine that it would be quite a party. But our traveler, 39, has a small problem. He just found next year’s version of himself, 40, dead in an elevator. The older versions of himself are still there, but what happens if he can’t find the killer?

The first half of the book is great fun. Drinks and bad party food, socializing with younger and older versions of himself, our traveler is having a great time and some of the conventions of the party are a lot of fun. I was looking forward to seeing where the story went and how he would solve the mystery. Unfortunately, that’s not quite how the story played out.

To find his killer, the traveler goes back in the past and seems to get stuck there. This version of New York, circa 2071, is nearly deserted, post-apocalyptic, and there is no explanation for it. I’m okay with no explanation – I rather like it. But this part of the story made no sense to me. Instead of trying to save himself, he was trying to save a woman named Lily that he met at the party. There are a lot of strange things going on in the city, which was kind of interesting, but the whole Lily story dragged on too long for my taste. We eventually get back to the party, but by then I’d almost lost interest. I didn’t find the ending very clear, to be honest, but maybe it was intended to be ambiguous. Either way, as much as I enjoyed the beginning of the book, it won’t find its way into my permanent collection.

My copy of Man in the Empty Suit

is an Advanced Reader Copy, provided free of charge. Find our more about the author on his website, SeanFerrell.com.

Teaser Tuesday
New to my shelves…

2 comments for “Review: Man in the Empty Suit by Sean Ferrell”