Review: Song of the Sea God by Chris Hill

This title was completely unfamiliar to me, but Nanette is a big fan of his blog and was really excited to read it. — Lisa 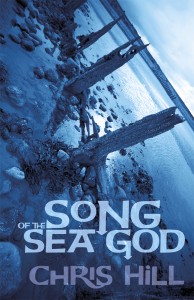 One of the great things about reviewing is finding hidden gems—great books that aren’t bestsellers, but probably should be. Song of the Sea God

is one of those books. The beginning just reaches out and grabs you—the language is lyrical, but colloquial at the same time, and the opening scene is startling. This is a voice to pay attention to.

The narrator of Song of the Sea God

is a man on the fringes of a society that is on the fringes itself—a small island off the coast of England, whose chief attractions are a chunk of bad art donated by a mediocre sculptor, and a city dump. It’s a place that kids grow up to leave, and people don’t really want to move to, a place full of residents beset by the humdrum and longing for what-might-have been.  At least, that’s the way it is until the unnamed narrator–a mute “short-arse” whom everyone wrongly assumes is mentally deficient–is saved from drowning by a mysterious stranger.  The stranger is John Love, a mystery man, healer, charlatan and messiah with a knack for divining people’s secret thoughts and telling them what they want to hear. Privy to John Love’s initial hoaxes, the narrator is drawn in by Love’s magic nonetheless. The community gathers around the new messiah, symbolically smashing the mediocre sculpture at the centre of town. Love seems offer food for the soul, fulfillment, and redemption from island’s humdrum, banal existence . . . or does he?

Chris Hill’s book hasn’t gotten much attention here in North America, and that’s too bad. This book is worth seeking out. For more on his work, check out his website, Song of the Sea God. I particularly liked his post on writing routines.

2 comments for “Review: Song of the Sea God by Chris Hill”