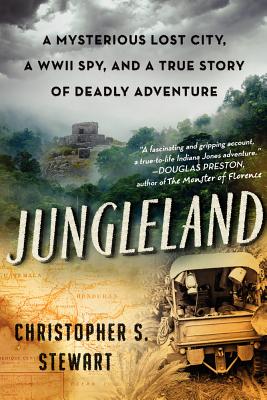 I was of two minds about Christopher Stewart’s Jungleland: A Mysterious Lost City, a WWII Spy, and a True Story of Deadly Adventure

. First of all, I love a good adventure book. Traipsing through the jungle looking for a lost city, with a plan based only on rumors and some numbers carved into an old walking stick? Love it! That’s my idea of a great read. There is plenty of adventure and mystery surrounding Theodore Morde’s trek into the Honduran jungle, looking for Cuidad Blanca, the White City. Morde is a fascinating character — a stowaway at 19 on a ship to Germany; 10 years spent sailing around the world, working as a bellboy, a cook, whatever work he could find on tramps and freighters; writing about the foreign ports he visited:

“He wrote about confidence men in Paris,; a dead man being burned on a pyre in Bombay; cockfighting in Siam. In Nias, a remote island off the western coast of Sumatra, he lived with a tribe of headhunters. He was surprised to find stone houses and paved roads in such a distant place, which made him start to ponder the early seeds of civilization…”

He fought in the Spanish Civil War and was probably a government spy, working on a complicated plan to overthrow Hitler. Eventually, like a lot of adventurers, he met a bad end, but not in a far-off jungle. Much closer to home.

There is every indication that he knew the exact location of the White City, but he kept it a secret, giving only hints, vague indications and false information. What was so compelling about this site that he did not want to share it with the rest of the world? Was it greed or something more sinister?

It’s a fascinating story. I can completely understand why Stewart got so caught up in it that he felt compelled to head off into the jungle himself. But that’s where my opinion splinters. I remember throwing Into the Wild across the room because I was so angry with Christopher McCandless, heading out into the Alaskan wilderness almost completely unprepared and breaking the hearts of his friends and family. Stewart isn’t quite as stupid as McCandless, but he’s no intrepid explorer:

“You don’t even know how to camp!” she said.

True: I’m not a backpacker or a trekker or even much of a hiker. I have a bad back. I have lived in New York City for more than fifteen years, so the idea of going to the rain forest might as well have meant heading off to Mars.

Stewart has a wife and a young daughter who is worried about her daddy getting lonely in the jungle and being eaten up by wild animals. I know he was trying to set a mood, sharing the conversations with his daughter, but they made me angry. How dare he deprive that little girl of her father because he got a wild hair up his ass about seeing the jungle!

At least Stewart had the sense to get good help. He had some excellent sources of information and he had a real-life Indiana Jones for a guide, a man named Chris Begley. They took sensible precautions and tried to be careful, but it was crazy dangerous and at so many junctures, it could have turned deadly. I can’t say that Stewart didn’t have respect for the jungle he was heading into, but he really had no idea just how bad it would be. This book could have had a very different ending.

All in all, it’s still a very good read, and other readers may not have my reaction. There is plenty of adventure and a terrific mystery to unravel, great fun if you like that sort of thing (which I do). It was fun to spend a little time on Google Earth, looking at pictures of the jungle.

My copy of Jungleland: A Mysterious Lost City, a WWII Spy, and a True Story of Deadly Adventure

New to my shelves…
New on the Shelves