Review: The Abduction by Jonathan Holt 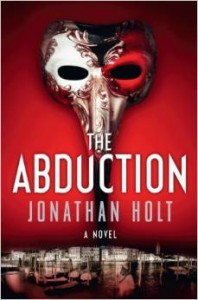 I was thrilled to receive a copy of The Abduction

by Jonathan Holt, the second book in the Carnivia trilogy. It wasn’t long ago that I reviewed The Abomination, which I thought was a terrific mystery, so I was eager to see where the story went next.

The Abduction focuses again on the unlikely trio of detectives: Venetian police captain Kat Tapo, Second Lieutenant Holly Boland, and reclusive genius Daniele Barbo. Tapo has filed a sexual harassment suite against her former lover, Colonel Aldo Piola – and good for her, because the resolution of their affair was really unfair for her. There is tension between Tapo and Boland, as well as an entirely different sort of tension between Boland and Barbo. These characters are so very different and it is really interesting to see the way they interact.

And then, just like the storyline in The Abomination, the story veers off into entirely new territory. There are interesting tendrils – a secret society, hacked email, disturbing documents found in the Vatican archives. This is what I love the most about this series! No matter where the story starts, it take you places you had no idea were even on the map. It’s such a refreshing change from plodding procedurals and predictable detective stories and I have been recommending this one to everyone. I am really looking forward to reading the third book in the trilogy – but I am not looking forward to the end of their stories!

My copy of  The Abduction

Not really a review…
Quotables