I’ve got a stack of new books to tell you about! First off, Three Hundred Million 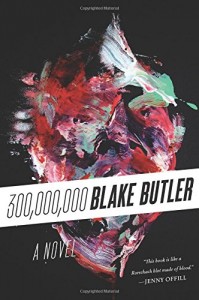 Blake Butler’s fiction has dazzled readers with its dystopian dreamscapes and swaggering command of language. Now, in his most topical and visceral novel yet, he ushers us into the consciousness of two men in the shadow of a bloodbath: Gretch Gravey, a cryptic psychopath with a small army of burnout followers, and E. N. Flood, the troubled police detective tasked with unpacking and understanding his mind.

A mingled simulacrum of Charles Manson, David Koresh, and Thomas Harris’s Buffalo Bill, Gravey is a sinister yet alluring God figure who enlists young metal head followers to kidnap neighboring women and bring them to his house—where he murders them and buries their bodies in a basement crypt. Through parallel narratives, Three Hundred Million lures readers into the cloven mind of Gravey—and Darrel, his sinister alter ego—even as Flood’s secret journal chronicles his own descent into his own, eerily similar psychosis.

A portrait of American violence that conjures the shadows of Ariel Castro, David Koresh, and Adam Lanza, Three Hundred Million is a brutal and mesmerizing masterwork, a portrait of contemporary America that is difficult to turn away from, or to forget.