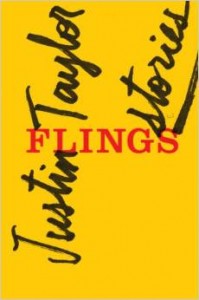 by Justin Taylor, a book of short stories, is interesting, but ultimately unsatisfying. The blurb on the back names Taylor “A master of the modern snapshot” and they might well be right. The book is like a stack of Polaroids, taken by strangers and with no context to explain them. (Think Awkward Family Photos.) They are fascinating, funny, vaguely disturbing, but by themselves, they aren’t enough to tell a story.

As always, I wanted to love the book – I love short stories, in particular, and I always want to love the books I settle down to read – but I found this one easy to put down. That’s never a good sign. While the stories were interesting, they weren’t absorbing and they weren’t satisfying. A good example is Mike’s Song, a story about a divorced father taking his adult children to a Phish concert. There is some hint that the divorce was his fault – probably something to do with his new girlfriend, Lori, who may or may not be cheating on him, based on some misdirected texts – and there is some random reference to a neighborhood boy who committed suicide back when his kids were in their teens. It is most definitely a snapshot. It’s an odd, awkward night with this family, full of tense undertones and secrets no one talks about. I can see why some people might be fascinated with it, the way you can be fascinated staring into a lighted window, watching the family inside and wondering about them, but in the end? I wasn’t drawn in. I didn’t care how it ended — which is a good thing because it doesn’t end, not in the sense that anything is wrapped up and resolved. We learn a few things about them, Mike learns a few things about his kids, but you don’t get any sense of what will come of that knowledge. We walk past the window and on to another one.

One story I felt was much more successful was After Ellen –  Scott leaves his girlfriend because she suggests getting a dog and he can suddenly see his whole life stretching out before him. The dog is just the start, the test before they have kids, get a house in the suburbs, a minivan, a carpool, etc., etc., etc. So he takes off, sneaking out while Ellen is at work, taking his half of their stuff, the car, and leaving her a note. He crashes in an expensive hotel with Mom and Dad’s credit card, and eventually finds a new place, a new gig as a DJ, a new girlfriend…and a dog. It goes somewhere. It has some resolution to it.

Now, there may be people who really appreciate these kinds of snapshot stories; apparently, I’m not one of them. The book, for me, was like seeing Waiting for Godot: I spent the whole time waiting for something to happen, feeling like there were clues and allusions that I was missing. There’s a fair amount of graphic sex in the stories that seems sprinkled in at random, more for shock value than anything else; for me, it didn’t seem to serve the story. While I enjoyed some of the writing and found interesting bits in most of the stories, overall, they left me unsatisfied. It was easy to put the book down and walk away because even the stories I finished felt unfinished.

My copy of Flings: Stories

by Justin Taylor was an Advance Reader Copy, provided free of charge.