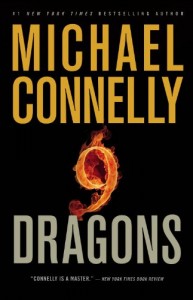 9 Dragons by Michael Connelly is the latest installment in a series of novels focusing on Detective Hieronymus “Harry” Bosch of the LAPD. There’s a shooting that may involve a Hong Kong triad, a reluctant partner, a detective from the Asian Gang Unit that Harry’s not sure he can trust. That’s just a typical day for a fictional detective, until the case strikes close to home: Harry’s teenage daughter, Maddie, goes missing and he receives a video from her kidnappers. She is clearly in danger and there’s every indication that it is tied to the Triad shooting. Harry is on the next plane to Hong Kong and he intends to bring his daughter back, no matter what.

I am a big fan of detective novels, and I love a good series — you get a chance to get to know the characters, to see them succeed (or fail) and to see what happens in their lives. Harry Bosch, the character created by Michael Connelly, is a great example. We’ve seen him through various ups and downs during his time with the LAPD (IAD investigations, transfers from Robbery Homicide to the cold case squad and back again) and turmoil in his personal life, including having his home destroyed in an earthquake. We saw him briefly married to Eleanor Wish, a former FBI agent who is now a professional poker player in Hong Kong; their daughter — a daughter Harry never knew he had — lives with her mother overseas.

The story starts with a shooting in a liquor store; not an uncommon occurrence in LA. The victim is an elderly Chinese man, someone Bosch met many years ago, and he feels a strong connection to the case. He’s a little out of his element — he doesn’t speak the language or understand the family’s customs. Consulting with the Asian Gang Unit leads to suspicions that a Triad may be involved — the victim appears to be paying off a customer with a suspicious tattoo on a surveillance tape.

Because Chu is unable to get a quick translation of the Chinese tattoos on the victim (which makes Bosch suspiscious), Bosch sends pictures of them to his daughter in Hong Kong. Maddie is able to make the translation and although Bosch cautions her to keep quiet about it, well, she’s a teenaged girl with pictures of a real-life murder victim on her cell phone! She is bound to tell somebody. A few hours later, Bosch has a video message showing his daughter, tied to a chair, the victim of a kidnapping.

Hong Kong is a very different world from Los Angeles, but Bosch is determined to protect his daughter. His ex-wife, Eleanor, and her colleague, Sun Yee, are able to provide some help, but Harry is running on instinct. He needs to find his little girl before she disappears into an Asian underworld of triads and human traffickers.

The story moves at a whirlwind pace and sweeps you right along with it. The characters are real and honest — there are no saints in this story and they will get a chance to try and atone for their sins. There are mistakes and mis-steps along with flashes of brilliant investigating. It’s a terrific addition to a terrific series.

My copy of 9 Dragons was provided free of charge through the LibraryThing Early Reviewers program.

New to my library…
Teaser Tuesdays!