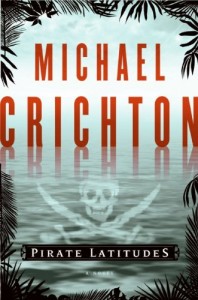 Michael Crichton told the kind of stories that grabbed us as readers and that drew us to the big screen. Pirate Latitudes, unpublished at the time of his death in 2008, is just that sort of story — a big, exciting tale of a handsome pirate, a woman scorned, impossible odds and a fortune in gold. You can almost imagine it unfolding on the big screen as you read it; at the same time, there is a wealth of detail you’ll only get from the book. It is meticulously researched, full of detail about the ships, the men who sailed them, and the intricacies of pirate society.

Captain Charles Hunter is a handsome fellow, a privateer of some reknown in Port Royal, a small English colony in Jamaica. The story begins in 1665, when a bit of gossip from a convict woman, sent to Jamaica ostensibly as a potential bride for one of the sailors or merchants crowding the colony, reveals an amazing opportunity: a Spanish treasure galleon is hiding in the port of Mantanceros. The port is impossible to reach, the Spanish captain guarding it is the most ruthless and sadistic man to serve the Spanish king, but Captain Hunter has a plan. It’s a daring and dangerous plan, but if they succeed, it means a fortune in gold for the Captain and his crew.

Captain Hunter assembles an interesting band of sailors, men with particular talents. Whether they are noted for their keen eyesight, their ability to handle the rudder or their skill with explosives, each has a part to play. And there are also political angles to the story — after all, piracy is highly illegal and punishable by death. They will not only have to execute the most intricate and hazardous plan in privateering history, they will have to be sure that it does not in any way look like the work of pirates.

The book was a sort of Ocean’s 11 for pirates. The intricate plan, the cast of characters, the subplots and subterfuge — and that in no way lessened my enjoyment of the story. I read the bulk of it in one sitting, and a lovely afternoon it made. The story gets started quickly, the characters are engaging and there is enough suspense to keep the pages turning at a brisk pace. I didn’t know until I finished the book that there are already plans to make it into a movie (Steven Spielberg has signed on to direct), but I can easily imagine it. (I would love to see Tilda Swinton as Lazue, and I have a few suggestions for Captain Hunter as well.)

The story is well-suited to the big screen, but what you shouldn’t miss in the book is the attention to detail, the research that Crichton undertook to write it. The story is full of detail: about the operation of the Port Royal colony, about the navigation and operation of the various sailing vessels, about the codes and conventions of pirate society. The characters may be entirely fictional, but every detail of their ship, the Cassandra, rings true. Stories of the sailors’ superstitions, of the way the shares were determined and distributed, about treatment of the men on board were all fascinating and added tremendously to the story. There were no glaring errors or anachronisms to pull me out of the story. It painted a vivid picture of its little slice of history.

Pirate Latitudes, Michael Crichton’s final, complete work, was published in November 2008. There is also an untitled and unfinished techno-thriller, the sequel to Next, a novel about genetic research, that is scheduled for publication in 2010. The movie version of Pirate Latitudes is in development and tentatively scheduled for release in 2011. His previous books include The Andromeda Strain, The Terminal Man, Jurassic Park, Sphere, The Great Train Robbery, Congo, The Lost World and Prey. He also wrote 4 non-fiction books, 10 novels under various pseudonyms, as well as numerous screenplays.

My copy of Pirate Latitudes was an Advanced Reader Copy, provided free of charge.

Teaser Tuesdays!
New to my library…