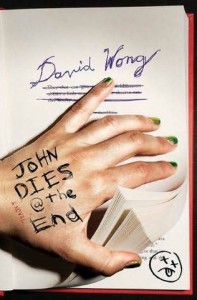 I have occasionally described books as “a wild ride,” and it’s often a very apt description. Books are like trips we take — some are pleasant Sunday drives, some are fast and bumpy. John Dies at the End

is like a ride on a twisting, speeding, swooping roller coaster. On acid. With no seat belt.

John and Dave are slackers. They work in a video store. They play video games. They are occasionally kind of silly:

“Dave? This is John. Your pimp says bring the heroin shipment tonight, or he’ll be forced to stick you. Meet him where we buried the Korean whore. The one without the goatee.”

That was code. It meant “Come to my place as soon as you can, it’s important.” Code, you know, in case the phone was bugged.

But this book has nothing to do with heroin shipments. The drug involved in this story is called soy sauce. And in this story, you don’t take soy sauce. Soy sauce takes you. It will, in fact, batter its way out of the vial, fly around the room and burrow right through the skin of your face to get to you.

John and Dave attend a doomed party where one of the partygoers introduces his pals to the sauce. At first, the side effects are amazing: knowledge and clarity and heightened senses. David knows that the cop he’s talking to has 2 daughters who attend Catholic school. He can hear a man talking on a cell phone — down on the street, outside the building he’s in. They see things and know things and the world is an infinitely more interesting place. Of course, David also walks up to a fast food joint, and instead of the smiling, happy clown we’re all familiar with, he sees a terrified, eviscerated clown, being forced to eat his own intestines. Dropping by his buddy’s house, he sees his friend already has a visitor:

There was a noise above me.
I looked up.
My heart skipped a beat.

It was hanging off his ceiling on seven little pink hands. The ridiculous thing’s red wig was cockeyed on its head. It looked down at me, then let go and landed a few feet away with a soft thump.

The thing is, I’m not sure that I can adequately describe the plot without giving away things that will be a lot more fun as surprises. It comes down to this: the soy sauce gives them access, lets them see. There are forces at work and nefarious plots. Time is a lot more flexible than they ever imagined. And these guys — they are very accepting. They aren’t thrown by the weird stuff they see around them, and we are talking about some seriously weird stuff:

The only other thing that was different about Molly was the blood staining her muzzle and the fact that she was floating three feet off the floor. Molly’s legs were stiff below her as she moved, buzzing slowly across the room as if on a track hung by invisible threads, When Molly came near the door she turned her head my way and in a clear but guttural voice said, “I serve none but Korrok.”

I loved this book. It was an amazingly fun read, even when it made no sense at all. There’s a lot of really funny stuff, some truly bizarre stuff, a host of interesting characters…and underneath, there’s some depth to it. I liked David, even though there is a certain sadness (totally understandable sadness) about him. John is the kind of guy who would bug the crap out of me, but would still be kinda fun to hang around with. And when the truly weird, scary stuff begins to happen, they are willing to dive right in, no matter how bad they know it’s going to be, because what else can they do?

The Afterword is interesting. David Wong is the editor of Cracked.com. John Dies @ the End started off as an online story about two buddies and their adventure with a monster made of meat, back in 2001. The buzz slowly grew, attracted readers, got the attention of a publisher; there was even a movie deal. He says:

Word of mouth. That’s all it was. No one “discovered” me, I didn’t get some big break out of the blue. It was a slow advance of strangers from around the world, passing around the link and loaning out those sad homemade copies.

Personally, I think that’s fabulous. I love the idea that such a cool story got such a cool start — and the idea that crazy folks all over the world, joined by the internet, can force the book industry to publish something we would really like to read. In the fine tradition of those strangers, I am putting my copy in the mail this week, sending it to my friend Julie in New Orleans. After that, who knows where it may go? I know a lot of people who are really going to enjoy this crazy ride.

I purchased my copy of John Dies at the End

based on the recommendation of a good friend with excellent taste in books.

4 comments for “Review: John Dies @ the End by David Wong”