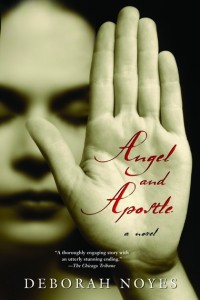 takes up the story of Hester Prynne and her illegitimate daughter, Pearl, and fills in the gaps left in Nathaniel Hawthorne’s The Scarlet Letter. At the end of the earlier novel, Hester and Pearl leave Boston and no one knows of their whereabouts.  Years later, Hester returns to Boston alone, still wearing her scarlet A. There are occasional letters from Pearl, who is married and living in Europe, and Hester lives out the remainder of her life alone.  Such a cheerful story, and one that infuriated all my budding feminist sensibilities as a teenager.  Why did Hester bear her burden alone?  Why didn’t she publicly declaim them — the man who dishonored her and the husband who abandoned her?  I’ve still got no satisfactory answers to those questions, but Deborah Noyes has given us the tale of Pearl’s childhood and marriage.

I have to wonder: were people really sitting around, thinking about a sequel to The Scarlet Letter? Were there people who sat around at Starbucks, talking about what might have happened to Pearl in Europe?  I suppose there must have been — if not in a coffee shop, there is surely an internet forum where people talked about this stuff.  For myself, I hated The Scarlet Letter and I recall some heated arguments with my high school English teacher about. (I can’t even say for sure that I finished the book.) Deborah Noyes’ writing certainly evokes the original; the writing is lovely and gives you a real sense of time and place.  It all feels quite faithful to the world of the original.

In Angel and Apostle

, Hester and Pearl are living in their small cottage on the edge of the woods.  Pearl is a willful child, but Hester isn’t exactly a doting mother.  It must have been very difficult for Pearl, never really feeling her mother’s love for her; in fact, I thought it would have been easy to decide that Hester didn’t love her daughter at all.  It was a difficult relationship for both of them.

Pearl meets Simon Milton, a young blind man living near them in the woods.  He has his caretaker, Liza, and his brother, Nehemiah, to watch out for him, but Pearl is determined to take him on adventures, even when she is chased away from their yard.  She is heartbroken to find that Simon’s family is planning to move back to England, while her mother has arranged an escape for them to Holland.  Fate intervenes, of course, binding Pearl to Nehemiah — the husband talked about in the earlier novel.  She and Nehemiah leave their home in London for a place in the country, taking Simon with them.  Anyone with eyes can see that this will not end well.

Noyes’ writing is lyrical and true to the world that Hawthorne created, but as a Hawthorne-hater, I am probably not the best person to judge this story.  I had many of the same frustrations with this novel that I had with The Scarlet Letter.  I still wanted Hester and Pearl to stand up for themselves and point fingers at the men who had betrayed them.  I wanted to think that Pearl would have learned something from her mother’s years of torment, but she is strong-willed and goes her own way, even when it leads to disaster.  Reading this was a frustrating experience for me, although it might be better appreciated by someone who enjoyed the earlier work.

My copy of Angel and Apostle

Throw the book at her – literally!
New to my library

1 comment for “Review: Angel and Apostle by Deborah Noyes”