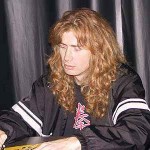 There was a lot more hair in Joseph-Beth Booksellers on Wednesday, August 18th.  Dave Mustaine of Megadeth (and formerly of Metallica) was on-hand to sign copies of his new autobiography, Mustaine: A Heavy Metal Memoir

.  Lots of black t-shirts, lots of long hair, lots of guys who have probably never been in a bookstore before.   Those are some of my favorite signings – like when the Hillstrand brothers from Deadliest Catch were in town signing copies of Time Bandit: Two Brothers, the Bering Sea, and One of the World’s Deadliest Jobs

, when the bookstore was full of kids and fishermen, it’s fun to see a new crowd.

I bought 4 copies of MegaDave’s new book — one for me, of course; one for my cousin, Ann, who couldn’t get time off to come with me; one for the son of one of Ann’s co-workers (apparently Jared is a big heavy metal fan), and one for a former co-worker of mine, Don, who used to have long hair and play in a band before he had to get a regular job.  I was able to get to the signing just by taking a long lunch.  Dave was nice enough to say that made me a very good friend, before making a very odd comment (more on that later).

The signing was well-organized and the line moved very quickly.  The speed was mainly due to the fact that there were no pictures and he was not signing anything other than the book — no Megadeath albums or posters.  There was, however, the usual problem with people who don’t normally come to book signings: they don’t know how to behave themselves.

There was a couple in front of me, mother and son, who are perfect examples.  The kid bought his book at another bookstore.  Really bad form there, son.  The bookstore has these signings to get you in the door, but mostly to sell books! Why should they let you buy the book somewhere else and then bring it here to be signed?  And Mom?  When your kid starts talking about how “gay” everything is, you should consider that a teaching moment.  Otherwise, I have to assume that you think it’s okay for your kid to use language that demeans other people as a description for something as basic as the rules for a book signing.  That’s really not cool.

And the guy in line behind me?  The one who was annoyed because Dave wouldn’t sign his book again (he bought it in Connecticut, had it signed at a book signing there and then brought it here, hoping for another autograph), I would feel bad for you, because it shouldn’t be any trouble for him to sign it again for a fan.  I would feel sorry for you except for the fact that you said several times that you bought the book elsewhere and then stole a line number here to get it signed.  Also not cool, dude.

Dave is very…leathery in person.  Considering what I’ve read so far, I’m not surprised – lots of drugs and hard liquor went into making that face.  But he was pleasant and smiled, shook hands and let people take pictures, and that’s always a plus.  He was a little odd, though.  I mentioned that I was getting all of these books signed for friends who had to be at work, and said that I was lucky because my boss was on another continent (he’s headquartered in the Netherlands).  Dave said they were lucky to have such a good friend, then looked at me very seriously and said, “It’s better than having a boss on another planet.”  Then he nodded, shook my hand, and went on to the next person.  A little odd, indeed.

The book is a lot of fun so far – I expect to finish it on my flight to Newark if my plane ever takes off (grumble, grumble).  Look for the review very soon!