Review: Stuff: Compulsive Hoarding and the Meaning of Things by Randy O. Frost 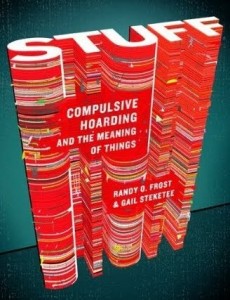 A friend who read last week’s review of Homer and Langley suggested this week’s book, Stuff: Compulsive Hoarding and the Meaning of Things

by Randy Frost as a follow-up. Stuff cover the story of the Collyer brothers in great detail.  In fact, that’s one of the things about the book that appealed to me — they focus on case studies, real people with fascinating stories. Some have more insight into their problems than others, but from each I learned very interesting things about hoarding and the people who struggle with it.

Why do people hoard things? We’ve all seen the shows — people living in house so crammed with debris and detritus that a normal person would be horrified. People hoard newspapers, animals, clothes, garbage and rotting food, even body by-products. They live in conditions that are unsanitary, inconvenient, and almost impossible to understand. What makes them do it?

It’s a complicated question and Frost and co-author Gail Steketee use a combination of research, case studies, anecdotes and theory to explain it. Basically, people who hoard don’t see things the same way normal people do. Their relationship with the items they hoard is very different. A person who hoards newspapers may do it because they see the newspaper and think of all the information it contains — information that will be lost if they throw the newspaper away. Nostalgic items like childhood toys can’t be discarded because the hoarder fears they will lose all the memories attached to those items, as if the toy embodies all those memories. A bag of old bottlecaps that most people would consider trash can instead be appreciated for their colors, their reflective properties, the patterns they make or crafts that might be constructed from them. It’s an entirely different way of viewing items.

For example, Jerry, one of the hoarders that Frost works with in the book, describes his feelings about throwing away the shards of a broken vase:

“I just want to save these…I’m remembering how it looked before it fell. If I throw them away, it’s like I’m giving up on it, and I hate to do that. It’s like I think somehow maybe it will get back together. I know it’s crazy, ’cause it can’t, but that’s what it feels like.”

I’ve always wondered, seeing shows like “Hoarders,” why people who have asked for help still fight so hard to keep their stuff. I mean, you asked these people to come and help you clean up your mess! The book helped to explain some of the reasons that people have so much difficulty letting go.  One reason is avoidance.  Making decisions is stressful — should I discard it and risk losing some cherished possession? But if I keep it, where will I put it? To avoid the anxiety, hoarders simply decide to do nothing. Leave it where it is. Don’t think about it. Much easier to go shopping.

I’ve mentioned before that I’m quite a packrat myself and I occasionally see some of my patterns in the case studies: assigning human feelings to a stuffed animal and being unable to discard it. Finding it much easier to let go of things if they’re being donated to a good cause, than if they are just being thrown in the trash. Promising myself I really am going to read all those cooking magazines someday. Reading these books — even if they aren’t intended as self-help books — has made me see those reactions in a new light.

The language in the book is easy to understand. The case studies are fascinating and tragic in a train-wreck sort of way. The ones that really moved me were the stories about kids, kids as young as 3rd grade who have hoarding problems. I would never have guessed that it could start so young! It’s not a how-to book, there are no step-by-step instructions on how to de-clutter your home. There is information on how to get help, if you or a loved one has a problem.

My copy of Stuff: Compulsive Hoarding and the Meaning of Things

was purchased as an audiobook from Amazon.com.

4 comments for “Review: Stuff: Compulsive Hoarding and the Meaning of Things by Randy O. Frost”