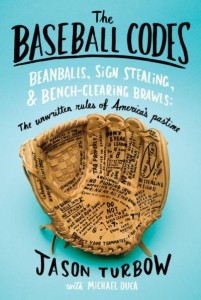 alternately entertained, educated and enraged me. I love that authors Jason Turbow and Michael Duca were not afraid to name names. They told some great stories about some of the great rivalries in baseball — not just between teams, but between players. They explain the rules — the unwritten codes that players learn in the dugout and in the clubhouse. Some of these rules are black and white — everybody joins a fight. Some of the rules are so vague that even the players can’t agree on the specifics. But everybody knows there are rules…and there are consequences for breaking them.

“I can break it down into three simple things,” said Bob Brenly, who followed a nine-year big-league career by managing the Arizona Diamondbacks to a world championship in 2001. “Respect your teammates, respect your opponents, and respect the game.”

That sounds simple, doesn’t it? Most players learn by screwing up: they do something stupid — like showboat a little on a home run — and one of their guys gets hit with a pitch. Later, in the clubhouse, they get a little schooling from the other guys and the traditions are passed on. There are even clubhouse police (Chapter 23) and kangaroo courts to help rule on minor infractions. But for the most part, younger players learn by watching the older players, taking their cues from the veterans about how to behave on the field, in the clubhouse, and in front of the media.

I was amused by the rules that even the players can’t decide on — running up the score, for example. It only seems sporting that if you are massacring the other team, you stop playing quite so aggressively in the later innings, to avoid embarrassing them. But how much of a lead is enough and how early is late in the game? What constitutes aggressive play – bunting? Stealing a base? How much celebration is too much?

There are some fabulous stories in this book. The story about how Satchel Paige came to call teammate Buck O’Neill “Nancy” is a classic. There was also the story about Tommy Lasorda’s grudge against Buster Maynard. In 1949, playing in the Single-A South Atlantic League, Lasorda threw a series of inside pitches that knocked Maynard on his behind — and Maynard had no idea why! He got his explanation after the game: 7 years earlier, when Lasorda had been just 15 years old and a huge Giants fan, he’d asked Maynard for an autograph and been ignored by his hero. It took him a few years, but Lasorda got his revenge.

Revenge is one aspect of the book that troubled me. I understood the rules about protecting your players (you hit one of my guys, I’ll hit one of yours), I understood the rules about hard slides and hard tags and when they are appropriate, but I have an issue with sending a fastball straight for a guy’s head, just because you’re mad that he bunted on you or frustrated because you gave up a home run. That ball is potentially lethal in a pitcher’s hands and they ought to know it (shortstop Ray Chapman of the Cleveland Naps was killed by pitch, thrown by Yankees pitcher Carl Mays). There are many stories in the book about players who suffered career-ending or career-altering injuries as a result of these pitches. Satchel Paige taught Nolan Ryan about “one of the best pitches” in baseball: the bow-tie pitch. You throw it right across their Adam’s apple — right where they wear their bow tie. I found myself angry and horrified listening, which is not what I expected at all when I started this book.

I enjoyed The Baseball Codes, even when it made me angry. It’s a terrific story about the behind-the-scenes stuff that goes on around the diamond. I loved getting a closer look. As for those ambiguous rules, there are a few I’m highly in favor of. For example, I completely agree that running up the score on an opposing team is downright rude and teams should never, ever do that. Of course, I was watching the day the Cleveland Indians came back from a 12-4 deficit to beat the Seattle Mariners 15-14 in 11 innings…and I’m a die-hard Indians fan.

I borrowed my copy of The Baseball Codes: Beanballs, Sign Stealing, and Bench-Clearing Brawls: The Unwritten Rules of America’s Pastime

from the good folks at the Kent Free Library, and returned it to them right on time.