Review: Every Step You Take by Jock Soto 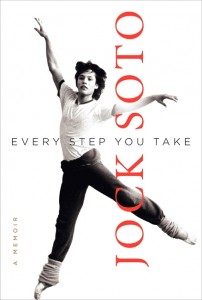 Every Step You Take: A Memoir

is a look back for Jock Soto at his family and his career, sorting through the influences that made him a unique figure in the ballet world. The writing took great courage, as some of his family history must have been hard to face — some unpleasant truths about his father, in particular, and his mother’s family. He has an amazing life story, a story that I don’t think could even happen today, and his telling of it is quite humble.

Jock got interested in ballet at the ripe old age of four, while watching Edward Villella dance on the Ed Sullivan Show. (He was performing a piece from Jewels, by George Balanchine, who Jock would later dance for at the New York City Ballet.) His parents took his request seriously and enrolled him in ballet classes. At 12 years old he auditioned for the School of American Ballet and was awarded a full scholarship. After a brief interruption in his training, he returned to New York with his family and at 14 years old, his family left, leaving Jock alone in New York City, with no income (other than his school stipend) and no adult supervision.

Who does that? Who leaves their kid alone in the big city like that? It’s crazy! I don’t think you could get away with that today. But he roomed with other dancers, couch-surfed a bit, and eventually built a family for himself among the dancers there. This new family of his is a theme throughout the book, the way he drew together with people who could give him the support and understanding that his family could not.

Jock’s family is interesting. His mother is Navajo and his father is Puerto Rican. They met in Philadelphia and when they ran off together, Jock’s mother dropped out of school and his father left behind a wife and infant son. Throughout his life, it was clear that his father carried on affairs with other women — he also has another half-brother from one of these liaisons. His father was very macho and not terribly accepting of his gay son. His mother was virtually disowned by her family for a number of reasons, not the least of which was marrying a man outside the tribe. While he obviously loved his family very much, there is a sort of disconnect. They really lived in different worlds.

First, let me say I enjoyed this book very much. I loved the glimpses into the life of a dancer — not just a prima ballerina, not just a principal dancer, but the day-to-day life of a dancer in the corps — and the way his life changes as he moves through the ranks. He was a principal dancer with the New York City Ballet for 20 years — the list of ballets and dancers and choreographers he knew is huge. It prompted me to spend a lot of time at Wikipedia and YouTube, looking up Balanchine, Wendy Whalen, Heather Watts, Peter Martins and others. I loved his stories about the dancers he admired:

“My mother found out where to send mail for [Mikhail] Baryshnikov so that I could write a letter to him — he actually sent me an autographed picture all the way to Arizona. (I still have that autographed photo, but I have never told Misha about it. When he and I see each other these days he says, ‘Hi, old man,’ and I say, ‘Hi, older man.’)”

This is a man who danced for George Balanchine, took class with Rudolph Nureyev, hung out in nightclubs and was painted by Andy Warhol. It is an amazing story of success from humble beginnings, taking an unexpected path.

I did find the writing a little clunky in places. The narrative jumps around a lot, going backwards and forwards in time. Jock occasionally gets a little lost trying to describe the emotion of being a dancer. That’s a really hard thing, to try and describe his connection to the ballerinas he danced with, being swept up in the music and the dancing, and some attempts are more successful than others.

Overall, an interesting memoir and a pretty compelling look at a very interesting life. My copy of Every Step You Take: A Memoir

1 comment for “Review: Every Step You Take by Jock Soto”