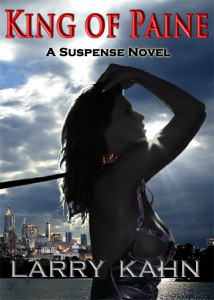 Another week, another guest post! This week, I’ve got Larry Kahn, author of King of Paine

, talking about his new work. There’s info on a big giveaway at the end of the post – a chance to win a new Kindle, just before Christmas! Be sure to read all the way to the end to check it out. While you’re there, check Larry’s website for other stops on this tour to find other guest posts and reviews of King of Paine.

When Eye Candy Fights Back: Adding Depth To a Love Interest

Frank Paine, the protagonist in King of Paine, is a former Hollywood stud who’s recently joined the FBI, a role that screams for a centerfold on his arm. As a former beauty queen and TV starlet, Jolynn Decker could easily fall into the “eye candy” stereotype, a conclusion not contradicted by our first look at her:

Time had faded his memory of Jolynn’s face, one that would drive a caricaturist mad for its lack of imperfections—fair skin, dainty nose, and mirthful, almond-shaped eyes. Her blond mane cascaded over a narrow-waisted, red winter coat like water flowing over a falls.

But as mentioned in previous posts, I rebel against stereotypes. As the story progresses, the feisty Atlantan alternates among suspect, tease, lover, sidekick, and victim, revealing more of her complex motives and nature with each new plot twist. I’m declaring this space a spoiler-free zone, so make assumptions about the order she takes on these roles at your own peril. My goal today is to share some of the techniques used to help Jolynn fight back against the eye candy stereotype.

I view “eye candy” as a character whose principal appeal is physical beauty, whether male or female, and these characters have their place in literature. Much of James Bond’s mojo derives from his legendary ability to snare the sexiest women with a wayward glance. Romance novels are rife with manly hunks with ripped abs and not much upstairs (so I hear). My own first novel, The Jinx, features several strong-willed and intelligent woman who tangle with my ordinary guy hero, but I couldn’t resist giving him one piece of sugar pie for dessert (call it a gift to ordinary guys everywhere).

In King of Paine, though, Frank Paine’s reformed womanizer needed a real femme fatale to tempt him, an attraction deeper than physical beauty, a chick who could drive him to play outside the FBI’s rules, maybe even sacrifice his life. So I gave Frank and Jolynn a passionate history, a true love affair that ended after a kinky Hollywood scandal destroyed her budding TV career but left him unscathed. Although Frank never stopped loving her, they haven’t spoken in three years when his new career in the FBI takes him to her native Atlanta.

Jolynn’s festering anger, the unknown depth of her emotional injuries, makes her reaction to Frank’s presence unpredictable. So when an anonymous online stalker threatens to reveal Frank’s kinky secrets shortly after he arrives in town, he’s forced to confront Jolynn. She expects (or pretends to expect?) an apology, so you can imagine the tension in that reunion when he accuses her of a crime. By building conflict into their history, I was able to magnify Jolynn’s emotional reaction to the accusation.

On tomorrow’s tour stop, The Enchanted Book will host my guest post “What Can You Expect From A 99-Cent E-Book?” My answer might surprise you. A library of bargain e-books could fit on your new Kindle Touch 3G, but even if you don’t win the grand prize in the King of Paine Kindle Giveaway Contest, you might still take home an Amazon gift card before Christmas. Enter today and improve your odds!