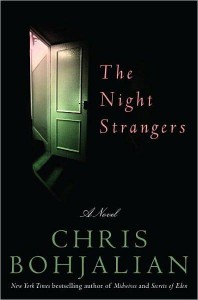 Someone really should have warned me.

I started reading The Night Strangers

at the airport. Flying from Cleveland to Detroit — over Lake Erie. Now, if you’ve read the book, you know what a bad idea that is. The Night Strangers starts with an horrific plane crash into Lake Champlain. Great. Good thing I’m not a nervous flyer.

Chip Linton, the pilot, does everything right and that doesn’t make him feel any better, because the outcome is still tragic. He and his wife, Emily, eventually decide to leave their home in Philadelphia and move to a small town in New Hampshire and try for a fresh start. I got the feeling that was really Emily’s decision — Chip doesn’t seem able to do much deciding and that isn’t at all surprising. He’s carrying a lot of guilt and Emily hopes the quiet and the scenery will help him begin to heal. Instead, they find themselves in the midst of a new nightmare…but by the time they realize what’s happening, it may be too late.

Their new neighbors are friendly to Chip and Emily, but their reaction to the Linton’s twin daughters, Hallie and Garnet, is spooky. They are fascinated, overly attentive, almost obsessed with the girls.

And let’s face it, Chip is not getting settled in. His tragedy has followed him in a very literal way. He sees his victims; he thought they were just hallucinations at first, but there’s more to it than that.

“When you turn back to Ashley, she is gone. Reflexively you pat the carpet where she was sitting, and it is damp with lake water. All that remains is the paper towel, which you pick up. It, too is wet, and it has the rank odor of jet fuel.”

In addition to Chip’s visitations and Emily’s sometimes bizarre interactions with the women in town, there is the house. Who wouldn’t be unsettled if they found weapons hidden in odd corners throughout the house? And the door in the basement, secured with 39 carriage bolts. Is it a coincidence that 39 is the exact number of fatalities from Flight 1611? And why are the girls so drawn to the abandoned greenhouse?

Plot twists and turns and lots of scary moments make this a real pleasure for horror and suspense fans. The ending will have you guessing — and even I could not have predicted how things would turn out. It’s a great ride, but take my advice: Don’t read it at the airport.

My copy of The Night Strangers

2 comments for “Review: The Night Strangers by Chris Bohjalian”