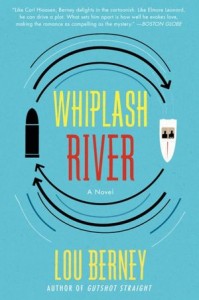 Shake Bouchon was livin’ the dream.

For years, he’d been a wheelman for the Armenian mob, but he’d gotten away clean. He bought restaurant on the beach in Belize, where he hoped to start fresh. The location was postcard-perfect, sea breezes and tiki torches and tourists with credit cards. Should have been everything he needed for a perfect retirement in Lou Berney’s Whiplash River

Unfortunately, the dream has a mortgage. Shake owes an arm and a leg and possibly other vital organs to a local gangster named Baby Jesus. Business at the restaurant has taken a turn for the worse and Baby Jesus is always lurking in the background, looking to collect. When Shake thwarts what looks like a professional hit on an elderly patron, things get really weird.

Shake’s biggest problem is a beautiful FBI agent named Evelyn Holly. She has big plans, plans to bring down the Armenian mob and she thinks Shake can give her the inside intel to do it. She’s ruthless; she doesn’t care if Shake doesn’t want to cooperate. Evelyn is perfectly capable of blackmailing him, putting him in danger, anything that will force his hand, but she isn’t the only one looking for him.

This is one of the books I read in Key West and it was a treat. Plenty of action, lots of plot twists, a little romance — great beach book, or maybe a book to read when you wish you were on a beach. Great fun.

My copy of Whiplash River