Review: The Wicked by Douglas Nicholas

by Lisa on September 9, 2014 in Book Review, Historical Fiction • 0 Comments 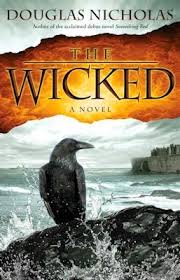 I am not normally a big fantasy reader, but I enjoy a little something fanciful now and then. I enjoyed Douglas Nicholas’ previous novel, Something Red, and I was not disappointed in The Wicked

. Thirteenth-century England is the perfect setting for this sort of adventure, with elements of historical fiction, mystery and magic.

Once again, exiled Irish queen Molly is traveling the countryside with her granddaughter, Nemain, her young apprentice, Hob, and her lover, Jack Brown. They have come to the castle of Sir Jehan, who they saved in Something Red, to discuss a creeping danger that is facing his long-time friend, Sir Odinell. Something is preying on the people in the surrounding lands – draining their life force, leaving wizened corpses. Knights sent out to battle this evil do not return or return in a daze, a shadow of their former selves. With good reason, Sir Odinell suspects Sir Tarquin and his wife; they have a malevolent air about them and their behavior is suspicious. But how does one battle an ancient evil?

Of course, Molly and Nemain recognize the evil and have a plan for fighting it. Their particular variety of Irish magic fits so beautifully into the Olde English setting. However, for me, the star of this series is Hob. He has grown so much – he started out as such an innocent, raised by a parish priest, and he has become a vital part of this traveling band. While he may not understand the magic that they practice, he is bright and observant, often noticing details the others have missed. He struggles with their practices – he was raised by a priest, after all, and he is traveling with pagans – but he clearly loves his new family and it is interesting to see them all through his eyes.

I am really looking forward to the next book in this series. I enjoy the portrayal of life in that time period, the mysticism and the characters. Before writing novels, Nicholas was a poet and that shows in his writing. It’s a real pleasure to read.

My copy of The Wicked

Hot Guys with Books
Review: Season of the Dragonflies by Sarah Creech